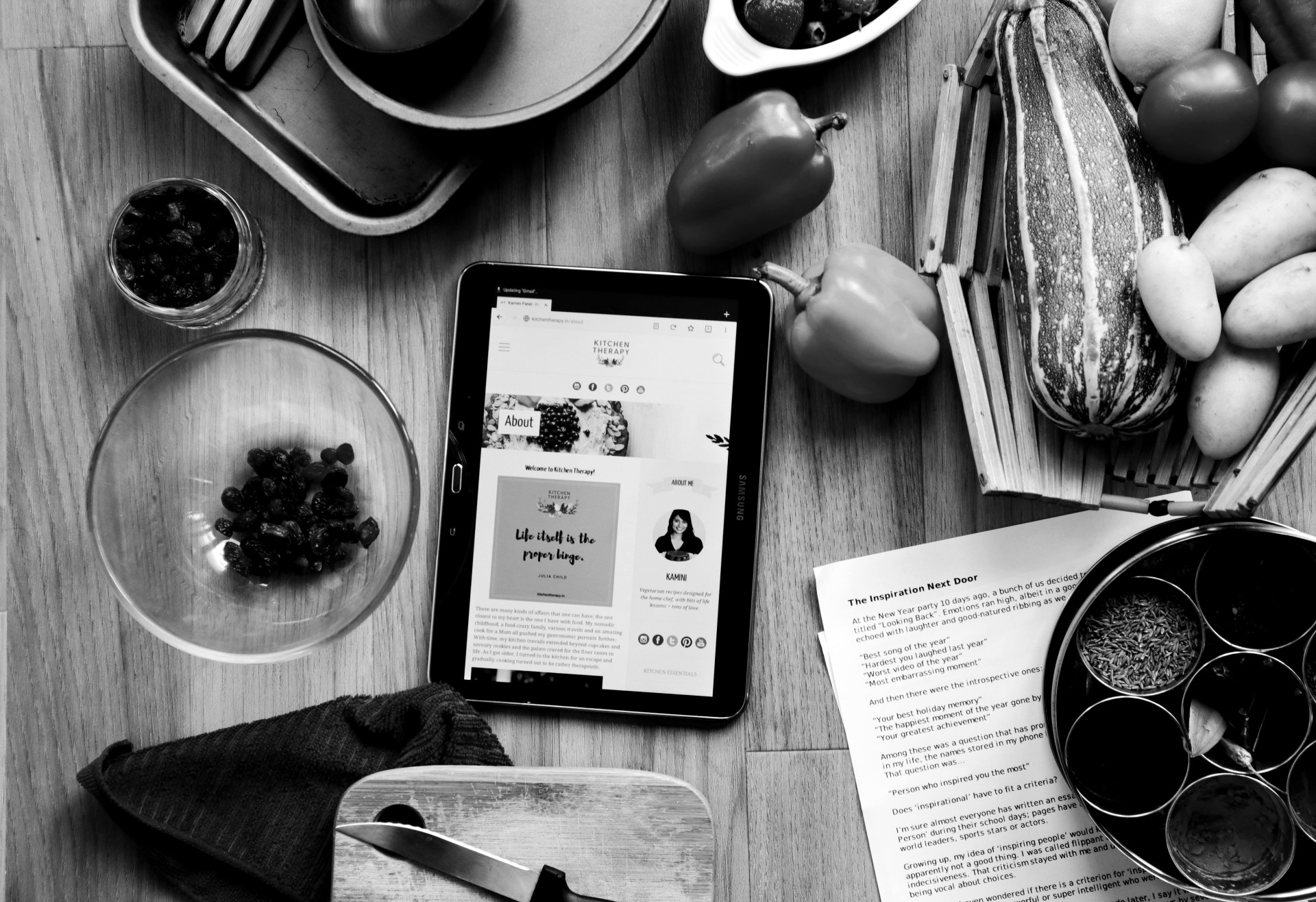 Finding Therapy in Pots and Pans

I was all of 18 when I marked the first international trip of my life. It was with the elder sister Raka, and we flew to Bangkok where she was pursuing a Masters’ degree. We stayed in her boarding room, part of a two-room unit with a shared bathroom and kitchenette. My first memory of that trip – other than drunken co passengers on the international flight – is of waking up to a smell that left me gasping for breath.

As I stumbled out of Raka’s room to find her in the kitchenette, she introduced me to her neighbour of Thai origin and the smell – it was breakfast time for the neighbour who was cooking sea weeds. I didn’t even know you could eat sea weeds!

What followed was a month of grappling with the strong smell of Thai cuisine, trying different types of food and overcoming inhibitions about food.

Amid that adventure, what awed me was the way Raka had adapted to the new tastes and lifestyle. She had trained her palette to be more accepting, was learning different methods of cooking Indian food in the absence of the complete spice tray and making meals for both of us in a tight budget.

Our mother says those years in Thailand made Raka the fabulous cook she is today.

So when Kamini Patel of the Kitchen Therapy fame told me about her days as a student when she experimented with food with limited ingredients and equipment and how she learned to make ‘foreign’ food with local produce, I knew I was speaking to a woman who knows her subject well.

A home chef, food stylist (“but only for my own blog”, she protests), food consultant, author, corporate communication expert, lawyer, and entrepreneur, Kamini is the Jane of several trades and a boss woman when it comes to all things food.

The first time I met Kamini was at a food styling and photography workshop, and to cut a long story short, I learned as much from Kamini that day as I did from the workshop organiser.

And then, as I delved into her blog and saw her Youtube show, my curiosity level only went north.

“Tell me your story, Kamini,” I requested and she graciously agreed.

Over an hour (and some more) long chat over coffee and gorgeous homemade cake, I heard the story of Kitchen Therapy, the girl behind it and the journey of food.

Sharing parts of the inspiring conversation with Kamini Patel who says the name of her blog is “literally” what she feels in the kitchen.

The genesis of wholesome, fuss-free, fancy but easily made with Indian ingredients recipes on the blog lies in Kamini’s adventurous childhood.

“I grew in several parts of the world – living in different cities and travelling to others – and we learned how to eat local food. So our eating habits were rather different,” says Kamini who distinctly remembers that when the family shifted base to Ahmedabad, “no one knew what hummus was. The number of good restaurants was few and outlets selling basic cooking ingredients (for us) like sumac or paprika were nil. So Maa and I would adapt recipes for food we’d grown up eating with fresh ingredients available locally.”

And it’s a challenge she takes up even today. “It’s easy to go to a mall, buy ready mixes – which are expensive – and make food. Everyone can do that. You need to learn how to mix and match to recreate a dish. It will obviously not be as authentic as what you’ve tasted but you can come close to replicating what is closest to your memory. That is how I started,” she explains.

Experimenting in the teen years

After being a boarding student at a school in Singapore, a move to Boston, United States, for higher studies saw the blogger fending for her again. “In the dorm, there was just a microwave and a fridge; I learned to make food with that. And after I moved to an apartment, I was lucky to have my local Indian American friends bring spices and vegetables for me. That’s when I started experimenting and learned to cook. It was in America where I learned to use a rice cooker to make my meals,” she laughs. And it continued after she moved back to Ahmedabad because “honestly, I cannot eat rotli, dal, bhaat and shaak every day.”

While she continued to cook and create magic in the kitchen, the blog happened much later and all in the course of battling a writer’s block following the release of Kamini’s first novel, a chick-lit titled The Morning After (published 2012).

“After I had moved back to India, I joined my father in the business. I even did some freelance writing with an English newspaper; it was a process I enjoyed and made me decide to write a book. I already had an idea for a story which stemmed from the absence of easy reads I could identify with,” she says, indicating the foreign-educated woman’s inability to identify with a story of an Indian management graduate. “I couldn’t understand the system I had not gone through,” and then there were the issues the generation was battling. “So I started writing the book, took a break for six months, and then wrapped it up in a few months,” she mused on.

And then she didn’t write again. “I was unable to come up with something good. I wanted to go to a different genre.” But sometimes you need a different kind of push, right?

“Every writer will say you should write something daily; it could be anything. I decided to write about food as I was cooking and creating dishes all the time. And most of my recipes have a memory attached to them. So I thought with each recipe I would give a story or information about a particular ingredient.”

Therapy in the pots & pans

And it was therapeutic too. “I didn’t have much of a social circle when I moved back to Ahmedabad and I prefer staying at home. Going into the kitchen was my way of de-stressing. It was an act of therapy. In the kitchen, you leave out all thoughts and worries. All you are thinking about is if the garlic is cooked enough or the next spice. It is rejuvenating. It was, and is therapy.”

Interestingly, the mention of ‘therapy’ made its way to social media much before the blog took off in 2016. “I was told to create an Instagram account while promoting my book. I did. But I didn’t want to put up personal pictures so I would take pictures of my food – mostly the food I cooked – and post those pictures with the #kitchentherapy. Sometime later, I realised people from my feed were posting photographs using the same hashtag. So when the idea for the blog came up, it was only natural to name it Kitchen Therapy,” she laughs.

That was back in 2016. Today, Kitchen Therapy has become more than just a blog. “It is my office that gives you an idea of what I can do – plating, styling, food,” says Kamini who also has a “food and wellness store where I curate products made in India and not available in the supermarkets. Most of these products are usually handmade, natural, and organic.”

On the little (or big) screen

Apart from these, she is also a food consultant and has her own cookery show on India Food Network’s YouTube Channel where she is sharing what she is best at, making interesting food in your kitchen.  “I barely post Indian food because there are others who do a better job of it. I have the potential of showing you how to use your regular spices to make different things, to make your kids eat the vegetables. That’s why, when IFN approached me, I clarified that I don’t do Indian food. They were willing to give it a try. We were all surprised with the response” she says, happy because, at the end of the day, it’s her wish to teach people to cook.“I did not start the blog to monetise it. I started it to write, to cook, to eat and to teach people around me to cook. I have a very traditional mindset and for me home means home-cooked food it’s to bring your family together. And I am helping you do that.”

So how does one become a master chef like Kamini without formal training? “I’ve been cooking for 15 years now. The more time you spend in the kitchen, the more you learn. And I read a lot. I am constantly reading. Even when I am watching TV, its cooking shows. You always pick up things – you learn tips and tricks. And now that I am officially in the industry, I do it even more. I know I am not professionally trained and I have this desire to up my game so I am watching things every single day.”

Visit Kamini Patel’s delicious blog Kitchen Therapy and pop into her kitchen to see what she is cooking on her YouTube show. You can also follow her on Instagram with @kitchentherapyindia

‘Tis the season to be Jolly!