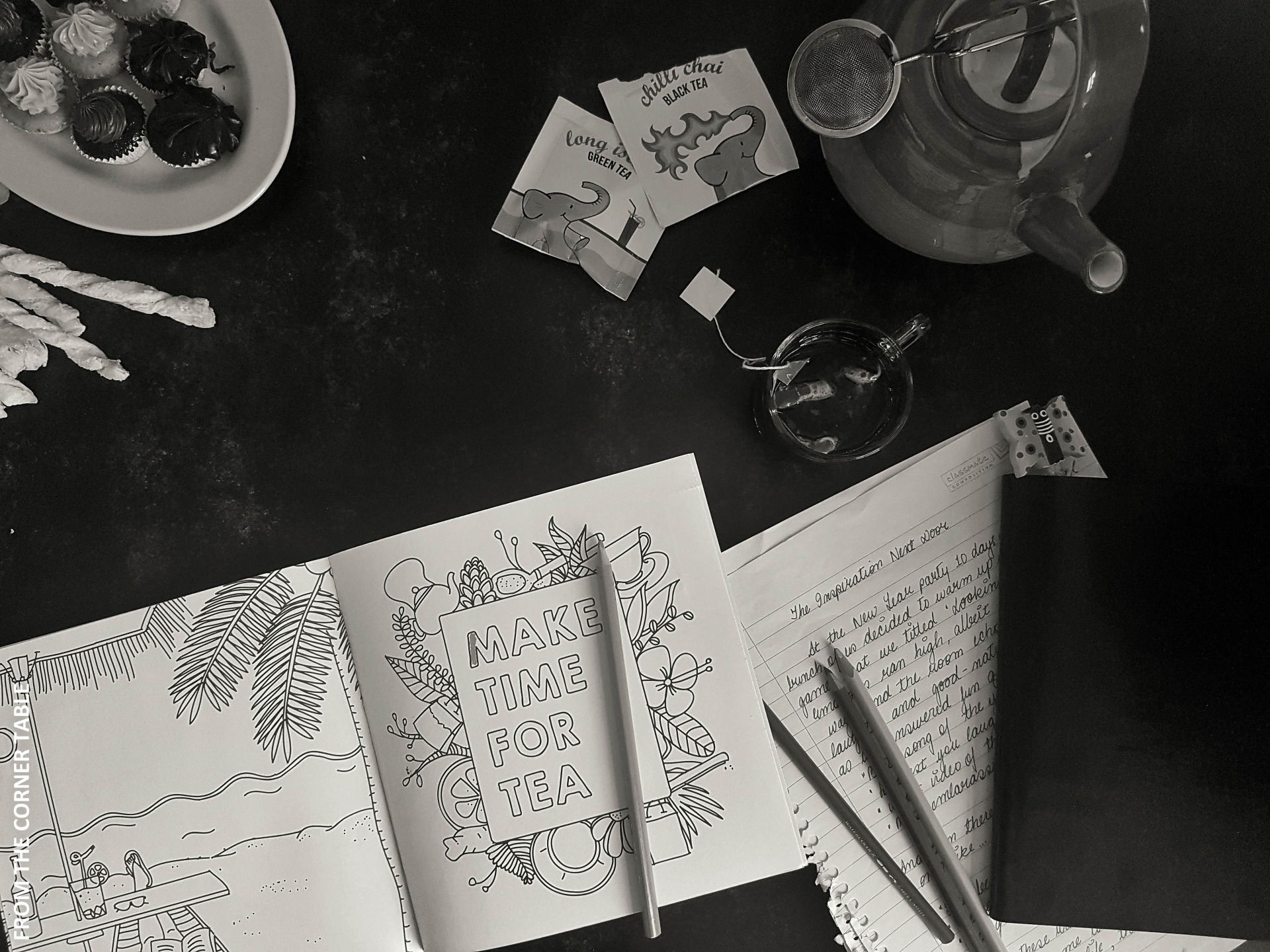 This is the tale of a young princess, a little packet, a treasure chest and a childhood dream of unravelling tales stored in a trunk.

This is the tale of the princess who turned her passion and love for the little packet into a lucrative business.

This is the tale of Snigdha Manchanda, corporate slave-turned-tea sommelier and teapreneur, who is among the handful of people working to guide a nation of chai lovers towards understanding their teas better.

Those of you who’ve been with me for a while might remember my post ‘Tale of three teas’ when I had attempted three tea recipes. I’ve come a long way since. While my love for coffee remains unparalleled, I am now learning to appreciate tea. More after a visit to a tea estate in Munnar, Kerala, and a fun meet-and-greet session with Snigdha in Ahmedabad.

Snigdha’s is not a rags-to-riches story nor is it a saga of a battle-against-evils. Her story is more of a journey that started when her father gifted the young Snigdha his old trunk and a packet of tea that she stored in her precious trunk. This tea packet was joined by several others from across the globe – at one point she owned 100 types of tea – fanning her love for tea. A sabbatical from work, an interest in tea translating into training at a school in Sri Lanka led to Snigdha becoming India’s youngest tea sommelier in 2012.

Since then, through her passion and persistence, the now 33-year-old has shattered the ‘rules’ of the tea industry where, unlike her male counterparts, she has had to prove her ability and efficiency time and again. After all, one does not become a trendsetter with a company like Tea Trunk that curates ‘the finest teas of India and craft them into unique blends with all-natural ingredients without shooting down the odds.

Excerpts from a chat over chai with Snigdha Manchanda, tea sommelier and owner of Tea Trunk…

Sabbatical with a twist

Having collected tea since she was a child, among the first thoughts that rushed through Snigdha’s mind when she took a sabbatical after 10 years of work was… Tea! “I thought, ‘Let’s go on a holiday to some tea garden and see what it’s like learning about tea’. I had been collecting tea since I was 15 years old but I knew very little about it. This led me to enroll in a tea academy in Sri Lanka where I trained under Japanese Tea Master Nao Numekawa who was straight out of a Kill Bill movie, a ruthless master who worships tea. My tea learning experience went from being a nice holiday in a tea garden to an intense tea learning experience. But I learned all there is to learn from him.”

Having enrolled in school in 2011, Snigdha returned home in 2012 happy but with “no intention of pursuing this (tea business) further”.

Until “a couple of friends suggested I host a tea tasting to share what I had learned at school. We put together something for friends/family and I hosted my first tea tasting session in 2012,” where the Mumbaikar spoke rather passionately about good quality tea, whole leaf tea, tea bags, etc… The workshop ended with Snigdha facing the million-dollar question from the workshop attendees: “Where do we get this tea!”

Brewing realisation and hopes “It struck me I didn’t have an answer. I realised if I am going to talk to people about amazing teas, then I should be able to make it available for them.”

This set Snigdha off on a journey to provide the perfect blend of artisan tea to connoisseurs and experimenters. “It took me a year to finalise the product as I worked out the logistics and produce, travelling across the country to locate things like lavender, chamomile, the teas, the blenders, etc.”

Tea Trunk launched in 2013. Snigdha says the idea was to give it two years: “If it clicks fine and if it doesn’t click then it will be a nice holiday in Goa,” which is where she set up shop. Getting requisite trade licences in Goa is a streamlined process and one does not have to shell out bribes in thousands, explains Snigdha.

Breaking through the mindsets

Daughter to a father who worked with a multinational oil and gas company and a mother who belonged to the education sector, Snigdha is the younger of two sisters. While her family has been super supportive of the entire journey, it is the mindset among tea blenders and estate owners that Snigdha has seen as a challenge.

“When I thought about going into business, I went to tea brokers in Kolkata where all the blending happens. I wanted a rose tea where the rose would come from so-and-so place in Jaipur and the tea would come from an estate in Darjeeling. The brokers said ‘why do you want to work so hard? We have different flavours of rose tea, just select one and we’ll package it.’” The idea was horrifying for the tea sommelier who insists “We are not tea brokers. We are more like craftsmen who work with different ingredients to craft tea. We are not buying, repackaging and selling to you. Why am I a tea taster if I am not adding value to the whole process?”

“The most frustrating question ever was and is when people ask whether my husband/father/ brother started the company for me! Tea Trunk is funded by the 10 years of work I did in Mumbai and my parents’ participation. An investor came on board only after four years.  All of it has been my effort and I am not ashamed to say it! I don’t want to give anybody the credit!”

The gender bias was reflected in the workspace when investors said her business would be more viable if there was a male co-founder. And then there were the disbelievers. “The first time I visited a tea garden in India and said I’ve studied tea under a Japanese tea master and I am a tea taster, I was given a test. They put out teas for tasting and asked me to identify tea. They would never do this to a male tea taster!” points out an indignant Snigdha.

Ironically and interestingly, this judgemental attitude is not seen among the workers who “are so warm and welcoming. They are not judging whether you know tea or you don’t know tea. They are happy you’ve come to their place. It’s the tea estate owners, tea brokers and blenders who question your talent because of gender.”

Gender, after all, has nothing to do with the strength required to operate one’s own business. “Running a business means you don’t get to pick and choose – you have to wear different hats on different days. Every day I have a different schedule and different hats to wear. And I don’t regret it for a moment because I think it comes with the package of having your own venture and I quite enjoy it.”

Quick tips for a cake stall