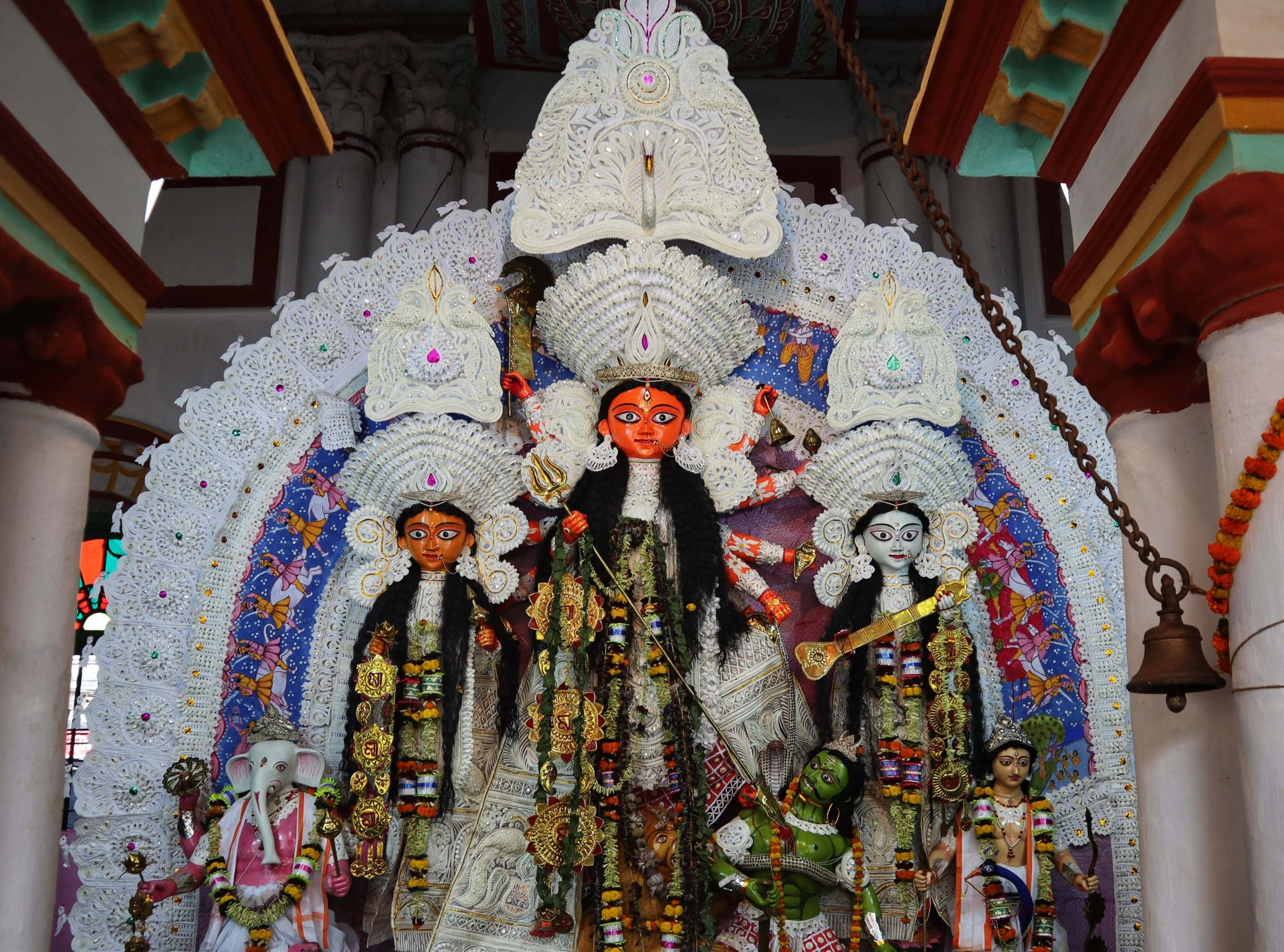 The Aristocratic Splendour of Durga Puja

I know, I know… It’s been over a week since we bid an emotional adieu to Goddess Durga and almost everyone is in Diwali prep mode. Some of your houses and lives must resemble chaos now – pushing the painting/remodelling job in the house, the annual home cleaning session in progress, shopping and planning the Diwali mithai, etc. etc.

I’m doing all that and some more whilst savouring the lingering effects of a festival spent well. This feeling will likely last till I am sprawled on the floor trying to get that rangoli (floor art) right. It’s going to be all about the Diwali (Hindu festival of lights) sparkles then!

The Pujo this season was special because yours truly went to Kolkata to experience the way Bengalis in West Bengal celebrate Durga Puja. I was charmed.

Words are not enough to describe the hue that envelopes the City of Joy during Durga Puja. It’s a week-long carnival of devotion, creativity, culture and competition. Streets lined with lights lead into pandals built after a year of planning, designing, budgeting and haggling. Puja organising committees are in a race against time and each other as they rush to book the creative minds that put together these stellar pandal masterpieces year after year. Don’t believe me? Check out ‘Race begins to hire artists for Puja ’19’ that I read when in Kolkata.

Tucked away in this glowing world are the Bonedi Bari Pujas. What is a Bonedi Bari? Pronounced bone-ae-di baa-ri, it is the term for homes of aristocrats and eminent families that were in existence before Calcutta was formed. In Bengali language, bari means home. With several members of these families having played crucial roles in the history of India and Calcutta, these palatial homes have become landmarks. Over the years, several of these homes have lost their sheen, their mammoth sizes making maintenance a challenge.

But come Durga Puja and a new life breathed in these structures. Families from around the world gather to welcome the goddess into their homes, follow the rituals as they welcome strangers to join festivities.

In most Bonedi Baris, puja is conducted in the courtyard where the idols are placed against the chalchitra (a decorated semi-circular background), flanked by European architecture inspired pillars that dot these grand courtyards. The puja (act of worship) is marked different by traditions specific to the families, adding to the grandeur of festivities.

The elder sister, a cousin brother and I decided to join a Bonedi Bari puja trip organised by a local company to satisfy our curiosity. I wish I could say the three of us had a good time with the tour company. But visits to the charming Baris and snippets of conversations with indulgent hosts salvaged what was a disappointing experience and made the trip a success.

I’ve already decided to spend part of the Durga Puja in Kolkata next year exploring some of the Bonedi Bari pujas that I missed. Hope this post gets you thinking about it too…

Counted among the grandest of Bari pujas in Kolkata, the Shobabazar Rajbari comprises two households of Raja Nabakrishna Deb, an eminent zamindar (landowner) in 18th century West Bengal.  As per locals, one puja is conducted at Chhoto Rajbari (small mansion) given by Deb to his adopted son Gopimohon. The second and bigger puja is organised at the Boro Rajbari (large mansion) that was occupied by Deb; it was later given to his biological son Rajkrishna and descendants. It was here that the zamindar started the first Durga Puja in 1757.

History states that Deb was a supporter of the British East India Company, a key figure in the Battle of Palashi and it was at the Durga Puja at his house that Robert Clive and company gathered to celebrate the victory. While the nightlong dance, music and food sessions have now become part of a legend, the better maintained Boro Rajbari’s puja continues to draw a huge crowd. A distinctive feature of the idol at the Boro Rajbari is the lion – the goddess’ mount – with the face of a horse. We even spotted several cooks hired to make delicacies like amriti and shingada to be served to their guests and visitors. How I wish I had grabbed a few for us!

The lesser crowded Choto Rajbari proved to be a wonderful place to settle for a few minutes, watch the rituals in peace and contemplate spirituality.

With the first puja held in 1770, the Chhatu Babu Latu Babu Puja at Ramdulal Nibas was established by Ram Dulal Dey, a businessman who pioneered trade between India and America in the late 18th-early 19th centuries. The responsibility of upholding the business and carrying on the traditional puja later landed on the shoulders of sons Ashuthosh Dey (Chhatu Babu) and Pramatha Nath Dey (Latu Babu). To ensure that the tradition was not washed away by the sands of time, five great-grandsons of Ram Dulal set up a trust in 1919 which continues to conduct all pujas since. By the time we entered this house, the morning puja had wrapped up and most people – other than the pujaris (priests) – had scattered as tourists like us jostled each other to click that ‘perfect photo’ with their mobile phones. When prodded for some information, a pujari said that the jewellery adorning the idol were heirlooms.

Amid this, a non-Bengali on the trip rather innocently questioned why the house was identified by those nicknames. The Bengalis in the room could only shake their heads as one began the process of explaining the custom of ‘daak naam’ (pet names) to this fellow traveller.

Started by businessman Durgacharan Mitra, the puja at Nilmani Mitra Bari is renowned for its ancient tradition of flying two neelkanth birds (Indian roller bird) after the immersion of Durga idol. While one bird was set off in the direction of Mount Kailash to inform Lord Shiva that his wife Goddess Durga was on the way home, the other bird went the opposite direction to herald her promise of returning the next year. This ritual, along with similar rituals in other Baris, was discontinued after the introduction of the Wildlife Preservation Act 1972.

Decked in glittering silver against a golden chalchitra, here too the goddess rides a creature with the face of a horse and the body of a lion. With all rituals followed meticulously, the goddess at this 200 (and more) years old puja is worshipped with aparajita flowers instead of the usual lotus flowers.

I’d always been intrigued at the amount of admiration the name of Rani Rashmoni garnered among my parents. For me, she had only been the person who established the famed Dakshineshwar Kali Temple of Kolkata. It is only recently as I watched a television serial about the life of this dynamic lady that I’ve come to be in awe of her. A dynamic individual, an 11-year-old Rashmoni was married off to a much older man. As she grew up in a joint household, she supported her husband’s causes benefiting the society, much to the dismay of her in-laws. Following the death of her husband, it was Rashmoni who took charge of her husband’s house and finances; under her guidance, the zamindari gained more power while she gained respect for defiance of the British Company. Little wonder then, that the Durga Puja established by her father-in-law, continued by her and thereafter her descendants continues to draw people.

Interestingly, the tour guide took us to two baris stating puja at both baris was set up by Rani Rashmoni. A bit of prodding and a few questions to the fellow visitors and a friendly pujari cleared the air. After the death of Rani Rashmoni, her three daughters and their husbands continued the tradition of Durga Puja at different premises. We visited a bari that hosted a puja continued by the descendants of her second daughter and son-in-law and then the main Bari puja.

It was fascinating to the note that this was the only idol where the goddess had been painted a shade of orange. Vibrant against the white chalchitra and flanked by white sturdy pillars, this idol (feature photo) was the most striking.

Relatively smaller than the baris we stepped into but not an inch less in splendour, the Bowbazar Chandra Bari Puja was started by Ganesh Chandra back in 1877. The few family members and helpers that had settled on the ground floor to monitor visitors even handed out information pamphlets. The pamphlet provides information about the migration of the family to Kolkata, their gradual financial growth and family members’ active involvement in social, economic, political and cultural spheres. Former Union Minister Pratap Chandra Chunder belonged to this erstwhile family.

It was at the Chandra Bari where the non-Bengali group travelling with us got a taste of the true flavour of puja when one of our companions played the dhaak (a musical drum) leading to an impromptu dance session.

It was in this bari that we witnessed different generations relaxing with each other at the end of the morning rituals, walking in and out of rooms that looked into the courtyard where the puja was being conducted. Started in 1855 by Dwarka Nath Dutta, this is perhaps among the few places where Maa Durga is worshipped in the Vaishnav style. Among the children running around, young guns posing for that perfect selfie and the men cooling under the fan, one could easily pick out the women of the household – decked in sarees, a beautiful gold nose ring adding an old-world charm to their demeanour.

As one of the older daughters of the family explained, “It’s a ritual in our families that all the married daughters and daughters-in-law are gifted a gold nose ring and the silver anklet. These must be worn during the puja.”

Urging homemade narkel naru (find the recipe in Of celebrations, memories & ‘narkel naru’) on me and the elder sister, the lady pointed out that the Thantania Dutta Bari has the Hara-Gouri or Shiva-Durga idol. In this, Goddess Durga is seen seated on Lord Shiva’s lap, a serene expression on her face.

Mallick Bari – the last on our stop and a source of excitement for several fellow tourists – proved to be a bit of a damper on our moods. For reasons as yet unknown to us, the family had chosen to put up a barricade and then strung a rope in the courtyard to keep visitors at a considerable distance. Dating back to the 15th century, the Mallick Bari puja was started by Radha Gobinda Mallick in the village of Bhawanipur back in 1860 before being shifted to Kolkata in 1925. The illustrious family includes several well-known names right from Indumadhab Mallick – philosopher, physicist, inventor, and entrepreneur. Famed father-duo actor duo Ranjit Mallick and Koel Mallick also belong to this family. It was the absence of the latter that seemed to disappoint several visitors who were heard murmuring that they’d come all the way to meet the two artists.