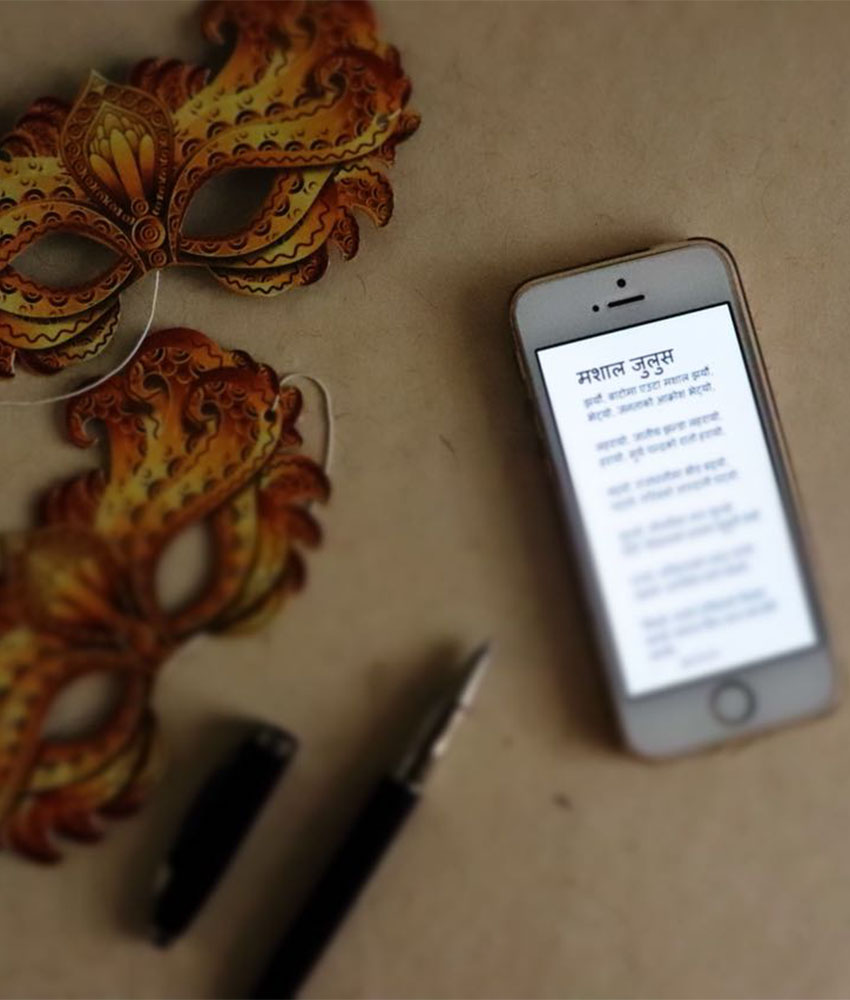 Painting Stories in a New Language

One of my resolutions for 2018 is to get a better grip on my mother tongue, Bengali. While I can converse in the language, I cannot read or write in it and that creates a feeling of disconnect. There is also a lot of literature in Bengali that I am missing out on and the bookworm in me bemoans that.

As a bonus to myself, I also want to learn a new language this year – Spanish or French or Urdu. But that’s a decision for the second half of the year – I go by my game plan to achieve New Year resolutions.

The credit for this ‘language learning spree’ goes to my mother and a childhood acquaintance, Bansari Pandey (Gandhi). We first met as school girls – our fathers are friends – and we were in and out of each other’s lives until college happened where we lost touch. It was only last year when Bansari came to Ahmedabad that we reconnected. What an amazing time we had as we chatted and watched the world go by from the corner table!

Who knew that Bansari would inspire me such that I would buckle down to be a student again! In a span of 4 years and a few months, Bansari, a Gujarati, learned Nepali, started writing poetry in the newly learned language, wrote and performed a play in this new language and is now teaching theatre! This after moving to Kathmandu with her husband.

Of course, I couldn’t resist the temptation to grill her. Here are some interesting bits from our conversation that included a lot of giggling, some leg-pulling and introspection.

“I have been interested in literature of any kind for the longest time and I love the idea of learning languages but honestly, that was not the reason for learning Nepali. When I moved to Kathmandu, Nepal – which is where my husband is from – I entered a joint family of 10 living in the same house. And not everybody spoke any language other than Nepali. To communicate with the family, I had to start learning the language that they understand. I even worked here for some time after the move and realised that while most people I met on a professional level could communicate in Hindi and English, it is easier if you know the local language.”

Bansari, however, chose not to go the tried and tested way of textbook learning.

“I learned from listening and observing people when they spoke to me. I made a rule in the house that everyone had to speak with me in Nepali. I would try to figure out what my family was telling me through context or actions. This method turned out well because I don’t have the typical accent that other Indian people have when they learn and speak Nepali here. People don’t realise that I am not a local. This could also be attributed to the fact that I have some local words in my repertoire which you would not find in books – these come from daily conversations.”

From student to poet

A poet at heart and an architect by profession, Bansari chose to carry her passion for the language further by ‘thinking in the language’. With four languages – Hindi, English, Gujarati, Nepali and a dash of German – in her kitty, the woman was on a roll. “After a year of learning, I wrote my first poetry in Nepali. The idea was ‘now I can think a bit in Nepali, I should try expressing myself in the language’. I wrote a lot of poetry in Nepali and even shared some at public gatherings. All this happened before my first long story which was part of my theatre workshop. I have always been interested in theatre and even dabbled in it back in school. So when I heard that a theatre group was conducting a workshop I said ‘why not!’ This was in 2017.”

Dipping her toes in theatre

While it was not mandatory that Bansari knew the local language, it did work as an advantage.

“During the interview, the director of the theatre group, aware that I am from India, asked ‘how good is your Nepali’ and made me read aloud a passage from Nepali literature. One hearing and I cleared the interview! Having a grip on the language made the workshop all the more interesting. I had an advantage as my English is good. One of our teachers was an American who taught ideas about politics and how we can include issues in theatre. His accented English was difficult for students coming from rural areas who don’t have a strong base in English. So I ended up translating his English into Nepali, including political terminologies.”

The theatre experience, where Bansari wrote a play about ‘demonetisation’, a phenomenon that shook India in 2016, was a thrilling experience.

“Writing the play was one of the exercises we had to do in the workshop. The idea was to take an object, bring it to life and think about what this object would have to say. And you have to perform that story. Everybody had to take an object of their choice. While brainstorming, I thought it would be a good idea to take currency notes and what better idea than to take a Rs 500 note (Indian currency) which had a political background and a story that I could take from. I first performed it in the workshop and later, we decided to include that in the final production. I changed the story and improvised it around 5 to 6 times.

“Prepping for the play took place over a month. The performance was exciting; I was on the stage after many years. People were surprised that I was performing and that too in Nepali, in a play written by me. It was overwhelming.”

Always on the roll

“I am teaching dance and theatre to the new batch of the workshop. And I am also going to take a few classes about architecture and stage designing. I don’t have much time for theatre but you never know, I may return sometime soon!”