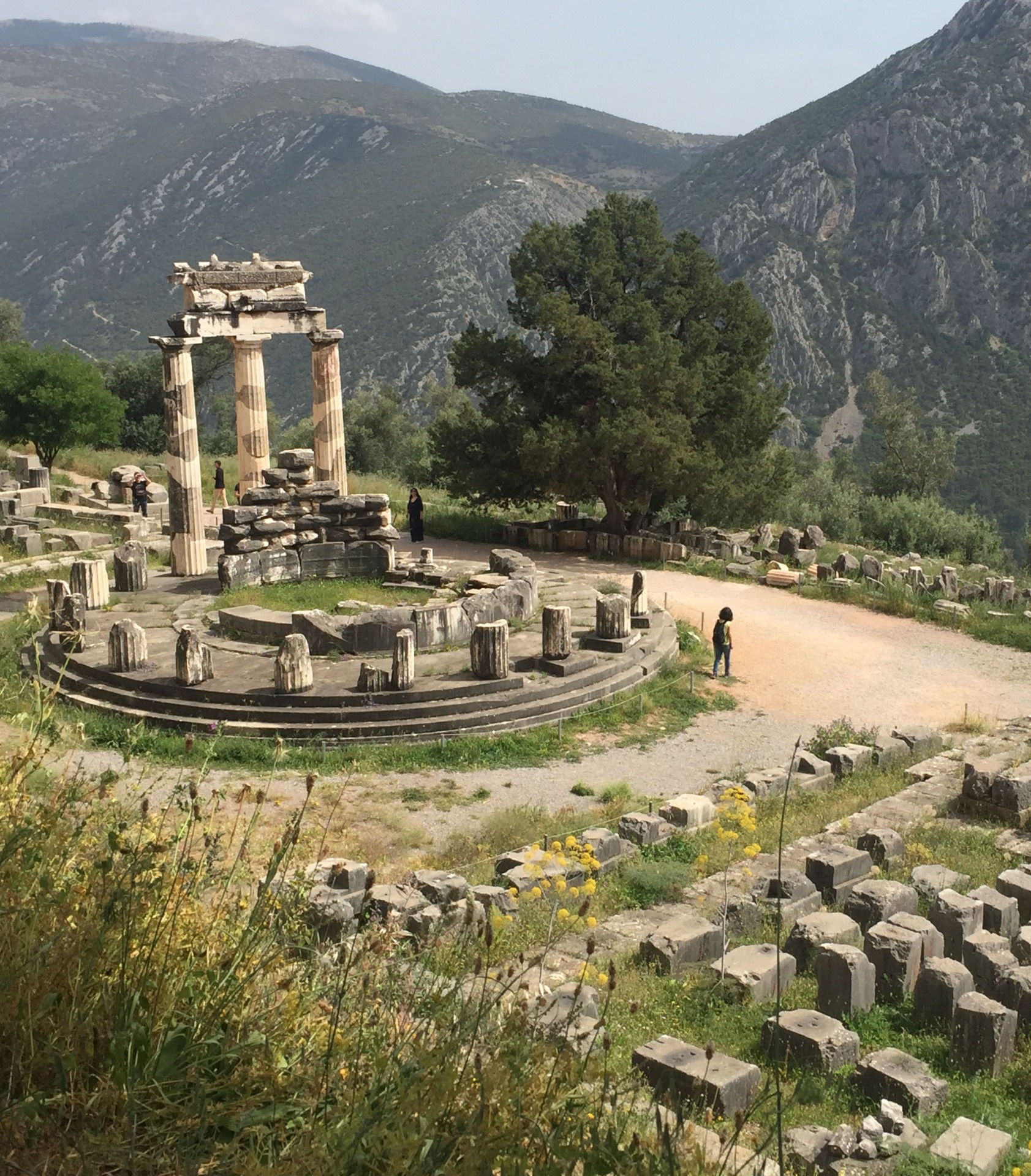 Meeting the Oracle at Delphi

Fans of Greek mythology have often been fascinated with ‘the Oracle’. And with yours truly and the elder sister being ‘almost fans’, we were giddy with delight when the brother-in-law pointed out that the famed seat of Pythia the Oracle, said to have been consulted for all important decisions in ancient times, was just a few hours away in Delphi. The tiny town was built around the Temple of Apollo and the Tholos, two ancient sanctuaries built on the slopes of Mount Parnassus. It should be noted that Delphi is recognised by the UNESCO as a World Heritage Site.

For the uninitiated, this Oracle is not the one from the Matrix trilogy. As per everyone’s favourite Wikipedia, the Oracle was “a person or agency considered to provide wise and insightful counsel or prophetic predictions or precognition of the future, inspired by the gods”. Pythia was the high priestess of the Temple of Apollo at Delphi and also renowned as the Oracle of Delphi.

Historical evidence suggest ancient Delphi was the place of worship for Gaia, the goddess connected with fertility. The town and temple gained popularity in the 7th century BC.

A day after trudging up and down the Acropolis of Athens, walking through the Athenian Agora and generally over-eating during an evening meal only to follow up with a traditional Greek dinner, the troika decided to venture out of Athens towards Delphi for a day trip.

Reaching Delphi from Athens is pretty much a breeze. Unless you prefer to drive up and down the mountainous roads, just head to Terminal B of Liossion Street Bus Terminal and hop onto one of the buses. Tickets are available at the terminal booking office. You can pick up a schedule from any tourism office in the city or check with the enquiry at the Acropolis of Athens. These buses take around 3 to 3.5 hours to reach Delphi and the journey is a visual delight. For those battling motion sickness, I recommend popping some pills to avoid a queasy ride.

There are stories galore that make the history of Delphi enchanting but one of the most interesting of stories is how the town came to be the location for the Omphalos or the ‘navel of the world’. Legends say Zeus – ruler of the Olympian gods – wanted to find the centre of the earth. So he sent two eagles soaring from the west and the east and kept a lookout for the point where the paths of the two birds converged. This point was Delphi where one found the ‘navel’ of the world.

The Omphalos – or perhaps a copy of it – is ensconced in the Delphi Archaeological Museum along with several other artefacts unearthed during the excavation of the Temple of Apollo and the Tholos of Delphi. Most of the relics that have survived are believed to have been from the 6th century BC, one of the most dynamic times of the town.

Among the first few things that you see as you begin the journey is a series of pillars that are said to have been part of an old Roman Agora. From here, you will walk up to the Sacred Way that is formed of a number of pillars that were the base for votive statues to honour victories and to honour the Oracle. Behind them are smaller structures built into the wall that were treasuries to contain offerings made at the temple.

Look up and you will see gigantic columns of Doric order looming, standing majestic against the clear blue sky. These are the remains of the Temple of Apollo, the key heritage structure at Delphi where the Oracle was seated and prophesied from. As per historians, the ruins date back to the 4th century BC; the temple survived until the Roman invasion in AD 390 when men destroyed buildings and artworks in an attempt to remove Paganism.

Further up is the Theatre of Delphi that gives spectators a view of the sanctuary and the valley below. Remodelled several times after it was built in 4th century BC, it hosted theatrical performances, musicians, orators and other people of the arts. The Stadium of Delphi sits atop the highest spot of Delphi and is the site where athletes from across ancient Greece gathered to show off their prowess and battle to be declared the top sportsperson.

Interestingly, a few well-informed individuals around said the stadium was the meeting point for competing athletes and these sports tournaments were the precursor to our Olympic Games. This information left me confused at the end of my trip since the guys at the Panathenaic Stadium (read more in Athens, where history lies under the sun #2) said the same. Perhaps the games collectively became the Olympic Games as we know it?

The climb up can be part exhilarating and part irritating – with such wonderful views to look up to and a gorgeous play of nature behind you, it is nothing short of an endeavour for one’s senses to absorb all that is seen. But none of us had bargained for my severe reaction to pollen from the wildflowers growing across the Temple of Apollo. Much thanks to the medicines I carry with me and the water bottle I refuse to leave home without for helping stabilise my condition enough that I was able to drag myself up the mountain. Of course, by the end of the climb, I was about ready to drop in the shade of one of the trees. But I have to admit, every gasp for breath was worth the experience of the Temple of Apollo.

I should also warn you about the stairs – pretty slippery so make sure you wear good shoes and walk slowly. Technical glitches set aside, I was wondering how these Greeks and Romans and all those who came after managed to build such beautiful structures on mountain tops!

The most picturesque site of Delphi is the Tholos in the Sanctuary of Athena Pronaia. Dated between 380 and 370 BC, this temple is an exemplary proof of the skill of the designer and workers who carved the intricate designs. Excavators and historians have reportedly said that the temple was made of 20 Doric columns that supported a decorated frieze – this design was repeated towards the central chamber too. We did note that the number of people at this site was relatively less, despite it being around 800 metres from the Temple of Apollo.

Site seeing done, don’t rush off to Athens or your next destination. You must pop into the excavated gymnasium, the entrance to which is tucked away along the stretch from the temple to the Tholos. Head out early in the day to avoid the glare of the scorching Greek sun and to allow yourself some time to unwind over lunch at one of the little restaurants before meandering through the town admiring the architecture, the levelled planning – you have to take stairs to reach connecting lanes – and the perfect settings for a Facebook profile photo.