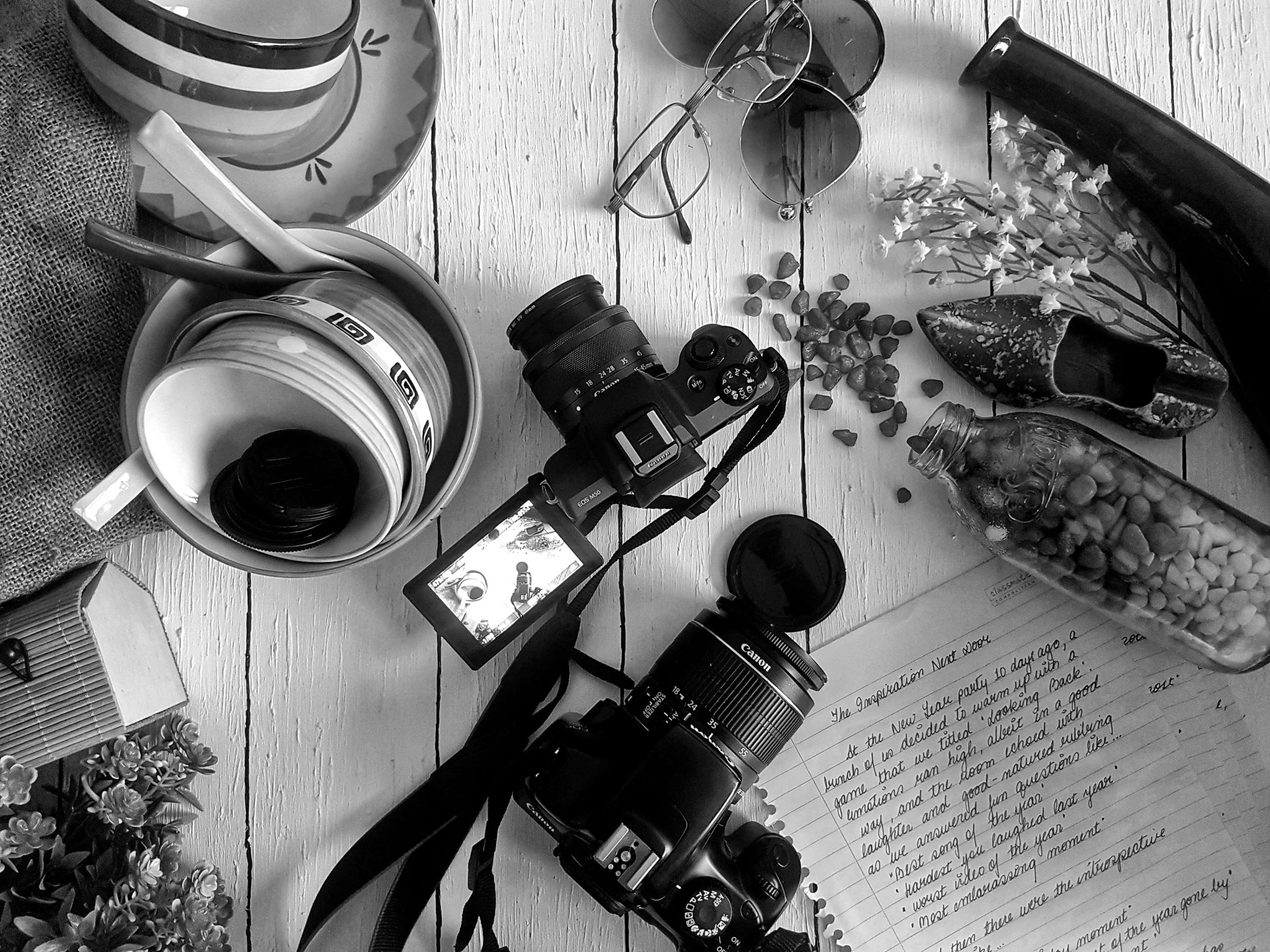 One of my biggest concerns, when the blog was taking off five months ago, was photographs. I could manage the touristy/birthday photos with my little camera. But I needed better.

While I was struggling with these issues and hoping I could get the blog rolling on time, someone told me that an “awesome” photographer was about to conduct a food styling and photography workshop. “This girl is really good with her stuff and is the preferred photographer for most food places in this city,” was the diktat. I did my bit of stalking on social media and fell in love with her vision.

Off I went to the workshop, armed with my tiny camera and a smartphone, excited about learning something new. No one told me I would feel like a fish out of water because almost everyone in that room had a DSLR and there were some professional photographers and bloggers too!

Because not only did Krishna study my phone camera’s settings and teach me the basics, she even took time out to understand and explain the settings of my archaic camera. She sent me home enlightened and hopeful.

Simple, smart, brilliant, helpful! That was my first impression of Krishna Lalbhai, one of the most sought-after food stylists and photographers in Ahmedabad. I thought she was born with the camera around her neck! And then I learned she is a civil engineer by education. Stunned?

Here are some bits and pieces from a conversation with Krishna Lalbhai of The Kitchen Trail fame.

First flush and the following lull

The true-blue Ahmedabad girl completed her schooling in her city, got a civil engineering degree and even went on to get a post-graduate degree green building design before she stepped into the field of photography. “Photography had always been a part of life. But it was while studying in Sheffield when I first tried to work with it,” says the girl whose only training in photography is a three-month course during graduation.

“Sheffield hosts an annual event called Tramlines Festival where they are open to volunteers who click photographs of the various gigs. These volunteers are given free passes to go up close to the stage. I went for that. It was fun. I took some pictures that the festival organisers put up on the website. That got me pumped up and thinking about pursuing photography.”

But all that enthusiasm dimmed after Krishna returned to Ahmedabad in December 2012 and joined an office. Caught up in life, it took a friend’s call seeking help for a fashion shoot to bring her back into the game. This was in July 2013.

“It was one of those style shoots where they wanted a white background with their clothes and then they wanted one that was more of an outdoor thing. Back then, the only time I had for a shoot was the weekend. I took a day off to arrange for basic lighting and the setup. Then, it was two days of shooting and two nights of editing.” Accompanied by her biggest champion, her fiancé and now husband Mohal, our girl delivered and how!

Work started trickling in and then, with a few assignments to her credit, Krishna – who lists Vivian Maier, Jessica Walsh and Dudi Ben Simon as her favourite photographers – took the plunge. “In December 2013, I left my job. I took up all kinds of projects for two years. I was clueless about what I wanted to do. Up until 2016 when I stumbled upon these really cool food bloggers who were posting what they are making and what they are doing. I found that interesting.”

Twists, turns and the naming game

The universe came together to give Krishna her chance to work on this interesting aspect and in December 2016, she worked on an experimental collaboration with a friend who was starting her own food journey. She continued her experiment with another upcoming food blogger. The experiments worked out just fine it seems because, in May 2017, the Kitchen Trail was launched.

“It took me four years to figure out my way, that’s too long,” mulls Krishna, until I quiz her about the name and the idea.

“Oh God! I can’t even tell you how much time it took to decide the name. Finding the correct name was important. I can’t build a brand halfway and then decide to change it. It took me four months to decide on the name and until then, I did not have a website, a blog or an Instagram handle.”

“Why the Kitchen Trail? See, I am not much of a cook, which is kind of ironic since I am styling and clicking food. Most food blogs/handles are about cooking, recipes and how you make things. I wanted the name to be more of a journey, about being someone who had not stepped into the kitchen to being someone who is connected with food. I wanted it to be about a journey starting outside the kitchen and then went into the kitchen.”

That was the initial idea but today, the name has become much more and much different now. “But I think I am okay with the name. It is versatile in so many ways,” shares the shutterbug, who has seen nothing but support from her family.

Prod her about the difference between when she started and today, and Krishna says, “I have my own style now which is really important. Like everyone else, in the beginning, I tried to see if I could replicate work or use that as a reference and do similar work. If I see those pictures today, I do feel that I could change things but I don’t regret them. Had I not clicked those then I would not have been here.”

And what would that style be?

“I prefer photographs that are not noisy, are a little decluttered, mostly clean, vibrant and fresh. But sometimes I do like the dark and moody too. I prefer the summery look but some foods just don’t go with it. But you will always find both on my social media handles. I love working with colours. When I think about what my feed should look like, I think darks, bright and then a pop of blue in the middle. Blue and orange are my favourite combination.”

Don’t forget the hands that keep popping up in the photographs! “I love action photos! Even though I’ve always been a fan of products and places where I don’t have to use too many human elements, I think it is important to have a feel of lifestyle or a human edge in your pictures. So every shoot that I do, I like to do one or two pictures where I have a hand. It adds to making me feel connected to the picture. Food is something we all enjoy and in India, we eat with our hands a lot and I think it is important to have a part of the body or bit of hands showing in the picture.”

And what is the secret to her styling? “Usually, it’s about getting the vibe of the place in the picture; what the place looks like helps me think. If the space is nice and vibrant, I don’t want to use dark there. And then I just know once I start setting things up,” says Krishna.

Cooking, attempted styling and clicking photographs tend to drain me, especially the process of racking my brain on how to style something. Krishna makes it sound like a breeze! “I think it is putting everything together knowing this is the way I want this photo to look and this is my version of what it is. I guess you could say the way an artist mixes colours, I mix different things to make a good frame.”

So does that degree in engineering that is gathering dust somewhere in your cupboard help in any way? “You will notice most architects, designers and engineers are always good photographers. We are taught to look at things in a certain way. I do interior and travel architecture photography as well so when I travel, most of my photography is about buildings. I have lots of lines in my photographs. In fact, apart from food and products, architecture and interior shoots are my other favourite.”

A year-long journey and a longer way

“I think the past year I’ve realised that styling is what I’ve enjoyed most. I’ve figured out so much that I can do and it has led me from doing food to products as well. Doing both simultaneously is not easy. Most people who seek these services employ a stylist and a photographer but I work by myself. But now I want to concentrate a bit on the styling and do a lot of collaborations with brands instead of just giving services. That’s where I am looking at for myself. I don’t know how long that will take, but I am definitely getting there.”

Want to check out more of Krishna’s photographs? Check out her Instagram handle @thekitchentrail or head to her website www.krishnalalbhai.com And while you are at it, go ahead and subscribe to From The Corner Table’s IG account @fromthecornertable