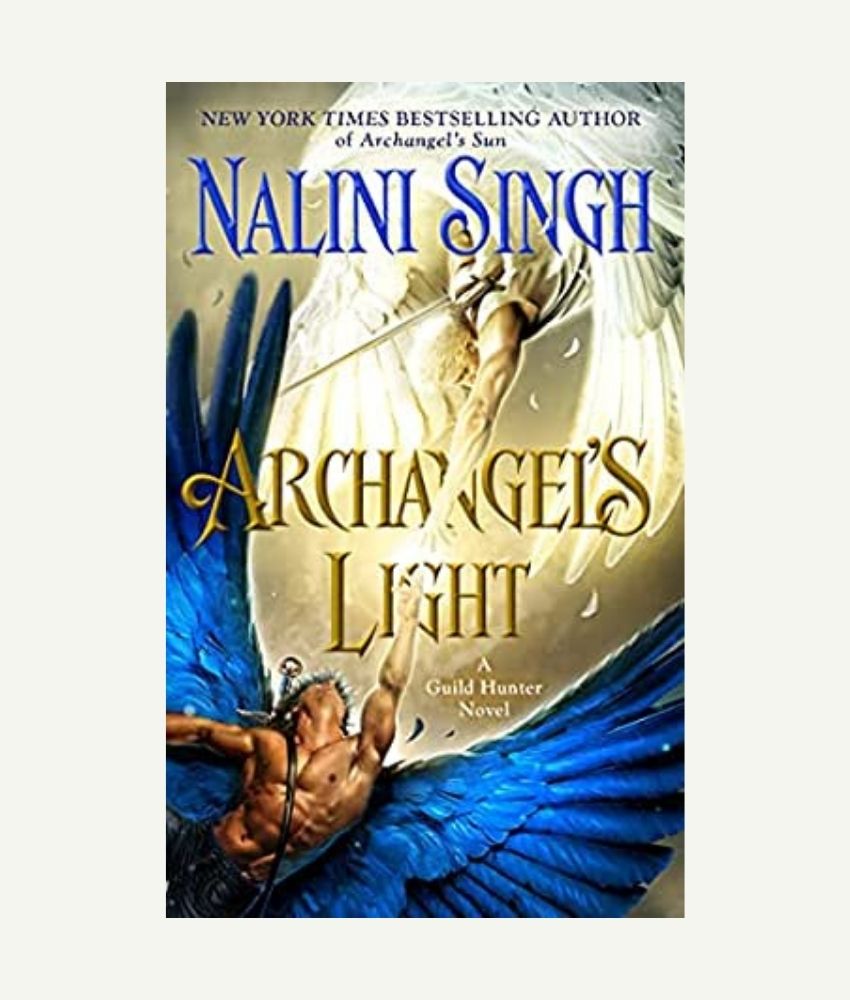 “It’s not weird. It’s us.” It was that simple. This was their story and they’d be the ones to write it, the ones to decide which turns to take.

The first M/M romance in Nalini Singh‘s immensely popular Guild Hunter series has been the most anticipated instalment. Why? Because (finally!) it’s time to read Bluebell aka Illium and his Sparkle, also known as Aodhan’s, stories. When I first saw the cover of this particular book, I did a booty wriggle in delight. As a series fan, I’ve been Camp Illium right from the beginning, drawn by his propensity towards humans, his loyalty to his sire-mother-friends, and his charisma. And his wings. Aodhan has grown on me despite making his presence felt only in the later novels. His physical description reminds one of a luminous diamond. He is beautiful and filled with valour, the kind that ensured the cruel acts that left him brutalized and traumatized.

To be honest, I did not like the book after my first read. And the blame lies solely on my preconceived notions and expectations – a cardinal sin because a reader knows that each book, even if it is part of a series, must be approached with an open mind. After revisiting the entire series, I went in for a second read and was awed by Nalini Singh’s storytelling techniques.

The author has dropped nuggets about Illium and Aodhan’s friendship from the first book, but most of it has been from Illium’s point of view – his need to cherish, pamper and above all, protect his childhood friend. And it is this care that Aodhan – who is finally unfurling his wings to step out from the darkness of his past – lashes out at, in the process breaking Illium’s heart. Perhaps for the first time in centuries of a friendship that started when tiny Illium toddled up to Sparkle and extended a chubby hand of friendship, these friends are at odds with each other. And it is this very reason that inspires Raphael, the Archangel of New York, to send Illium to aid Aodhan as the latter helps Suyin, the new Archangel of China, recover the territory from the dark blot left by Lijuan.

While the duo’s friendship is legendary – among angelkind that make Nalini’s alternate world and readers glued to the series since book one – the discord between the two that first came to light in Archangel’s Legion has rankled. But the author manages to soothe our nerves and fill our hearts with her expert writing.

Archangel’s Light picks up from Raphael’s decision. It takes the readers through the beginning of Illium and Aodhan, their childhood, friendship, mischiefs, first love, differences, and tragedies. The author achieves this by alternating incidents from the past with interactions in the present, thus enlightening us about:

One of this series’s more emotional and heartwarming novels, Archangel’s Light is a slow burn (often torturous and a tearjerker) romance without any of the sizzling physical aspects. Nalini Singh whets our appetite for some scorching M/M intimacies in the last chapter, where the duo meet after months apart, but this is yet another cliffhanger ending. Because if this was the only book dedicated to this beautiful couple, then I might just forsake this series. I’m hoping for another book or enough pages devoted to this fledgling ship that’s been centuries in the making… Nalini Singh, can you hear me?

A must-read in this particular series, it’s best you pick up Archangel’s Light after reading the previous books. Trust me when I say it’s worth the effort AND you’ll be lost without the background. Check out the list below along with links to the individual reviews posted on the blog and Instagram highlights.