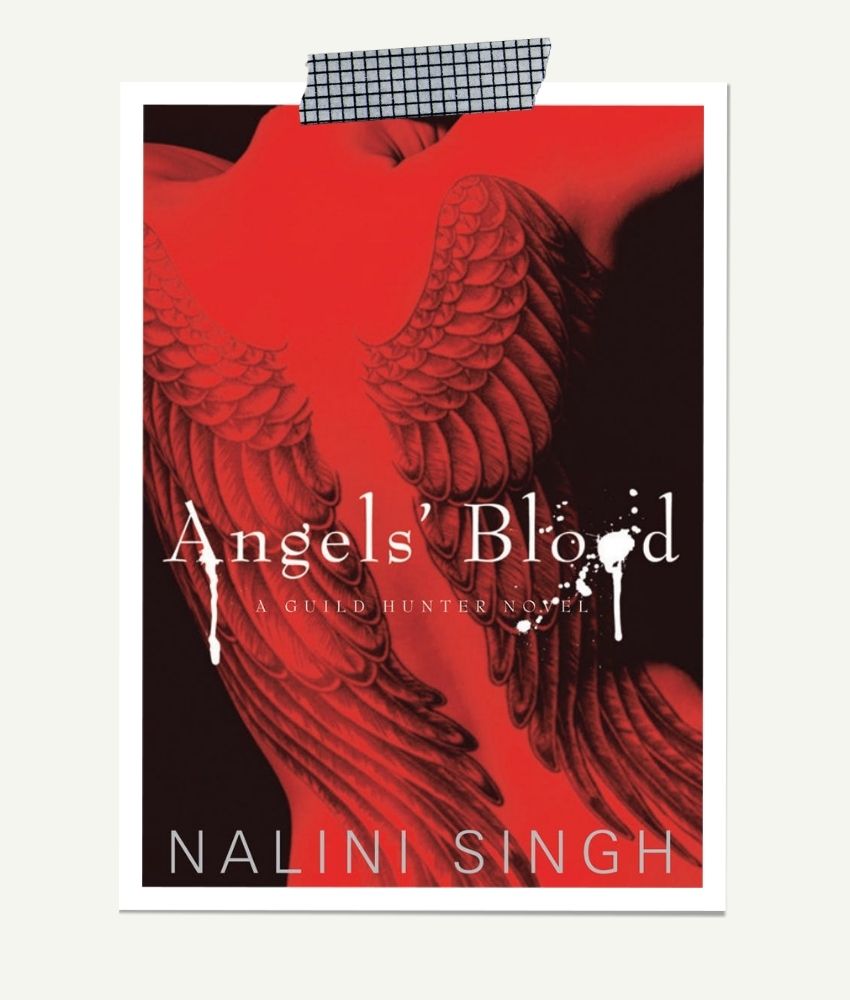 A smashing opening to a vividly written urban, paranormal fantasy series, one of my favourites in recent times. And I don’t say this lightly – I’ve read Angels’ Blood not less than four times, and I’d go back for a fifth read.

Set in the world of archangels, angels, vampires, mortals and one-of-a-kind creatures, Angels’ Blood, the first of Nalini Singh’s Guild Hunter series, kickstarts the story of Elena Deveraux and Raphael, the Archangel of New York. The author creates a world where the Cadre of Seven Archangels rule with ironclad (and often ruthlessly bloody) fists over angels, vampires and mortals. Archangels are the strongest predators, angels soar through the skies going about their ‘business’, vampires are Made through strict selection. They have to serve a 100-year-contract under stronger angels, and mortals reside alongside, well aware that while they thrive, they can be annihilated in an instance. Think of it as a melting pot of people from different ethnicities living together – only, in Nalini’s world, these are other species (for lack of a better word!)

Our heroine Elena Deveraux is a mortal with a difference – she is a Guild Hunter, a gifted and highly-trained vampire hunter. And it’s her unique ability that gets her hired by Raphael on behalf of the Cadre. Her task is to hunt for an archangel on a rampage which basically means she’s signed a death warrant – whilst in pursuit of an abomination or if she succumbs to the chemistry with the near-immortal Raphael.

Nalini has a striking way of drawing images with words, and she uses them to draw the reader vibrant characters and a thrillingly jagged world such that you find yourself invested in it. She uses these very words to build the fine lean lines of Elena, a badass heroine who is fiercely independent, courageous, filled with honour and manages to snag the attention of the extremely hot and inhumanely scary Raphael.

Raphael’s character is easily one of the most multi-dimensional characters written in a paranormal series I’ve read. However, this fact unravels through the course of the series. So don’t hold that against me after you’ve read only Angels’ Blood. Raphael is thousands of years old, jaded by age, isolated by power, determined to rule wisely, distant from his closest aides. He is also ethereally hot with a ruthless edge from being the strongest predator in the jungle.

The juxtaposition of the inherent natures of the two protagonists feels natural rather than forced. Elena and Raphael’s interaction is between the young and old – he is thousands of years old, and she is 28 – between dominance and independence, between someone who sees time as eternal and another who knows that time flashes by. The duo’s conflicts as Raphael’s attempts to exert control are rebutted by Elena’s determination not to ‘bow down to anyone’ forms the base of this unbalanced relationship – the verbal foreplay is the kind you’d want in a love story, witty, full of puns, laying the foundation. Because that is precisely what Angels’ Blood does while leaving you on a cliffhanging end!

Albeit focussed mainly on the two main characters, the author does a quick but thorough job of laying the groundwork for Elena and Raphael’s immediate circle. You are introduced to Raphael’s Seven (each character a treat!), Elena’s fearless group of Guild Hunter friends, and there’s a hint of past shadows that have shaped our couple.

I judge a reread, especially a series, based on the author’s groundwork for the upcoming novels right, and Nalini Singh does a thorough job in Angels’ Blood. Only when I went back to the first novel after reading through a majority of them did I notice the subtle clues woven into the narrative from the first sentence. This is not to say that the book isn’t without faults and loopholes that make you question the writer’s purpose but in most cases, the answers are revealed in the following novels. So happy reading!

Want to check out the reviews of the other books in this series to decide whether you want to add them to your To-Be-Read list? Just click on the titles.