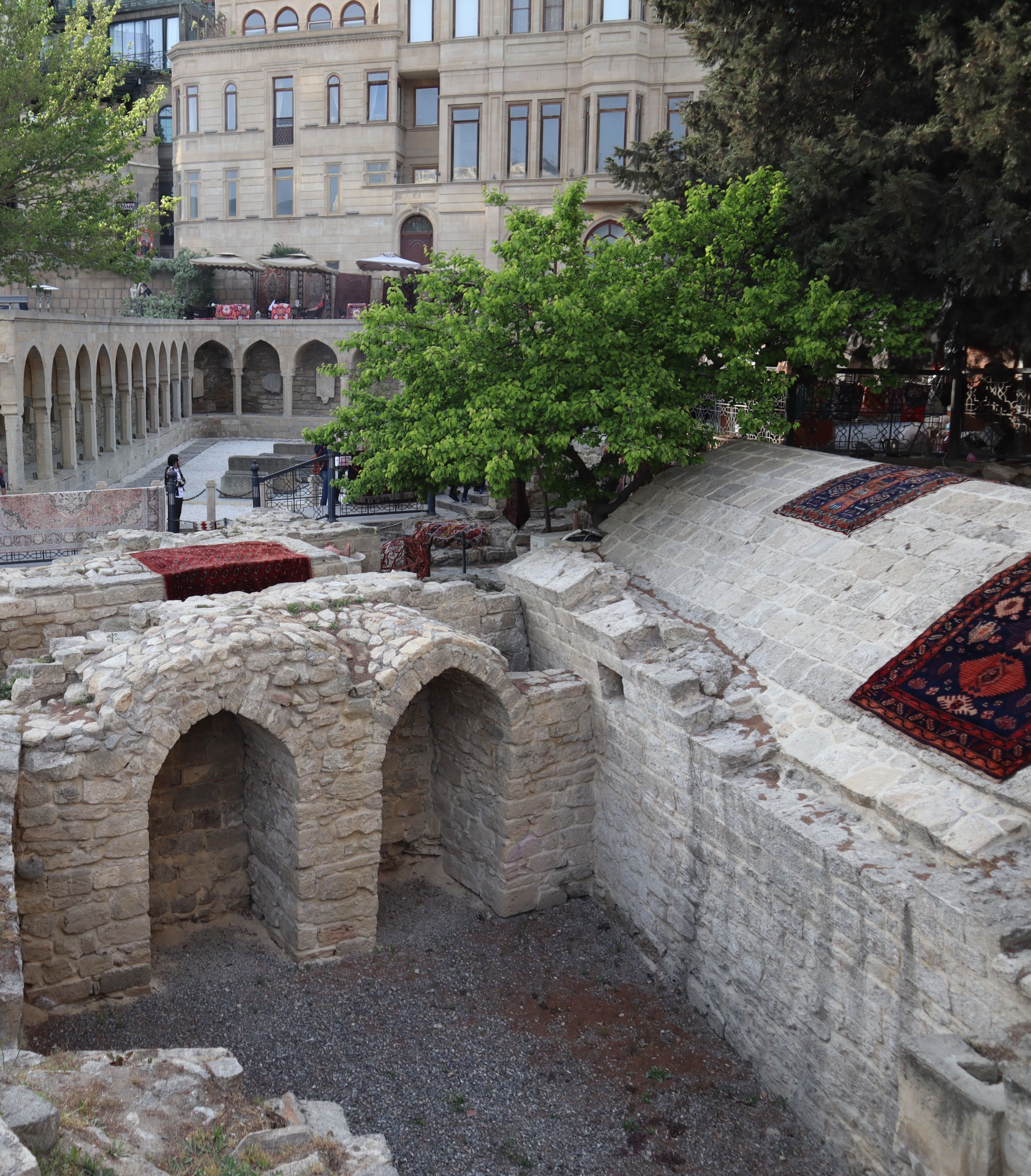 Baku, a potpourri of influences #Chapter I

Hey there. I’m back!

Hope you haven’t forgotten me! After all, it’s been a few days since I last posted ‘From The Corner Table’.

I know pulling a Houdini is breaking one among the few rules of blogging and I’ve already been at the receiving end of the “you have to be regular” lecture from my parents. My sincere apologies to all of you for the vanishing act.

I had my reasons – some good, some bad. But the best of them is that I was travelling! This time it was a week in Azerbaijan.

Oh yes! The summer of 2018 is well on the way to strengthening a top position on my personal list of the “best of summer”, what with a glorious April week in Kerala and a decadent week in Azerbaijan earlier this month. If you are among those generous individuals who follow the blog on Instagram and Facebook, then you must have seen pictorial evidence of the gorgeousness that is Azerbaijan.

I’ve been inundated with questions from friends and family, ranging from ‘why I chose Azerbaijan’, ‘where is Azerbaijan’, ‘what is the place like’, etc. And what better way to address these queries and perhaps prompt a traveller who prefers unchartered territories to embark on a journey to the ‘Land of Flames’.

A shout out to all the football fans planning trips to Russia in June-July for the FIFA World Cup; this would be the perfect time for you to book a trip to Azerbaijan – travelling from Moscow to Baku is a breeze.

The Republic of Azerbaijan lies in the South Caucasus region of Eurasia and shares its boundaries with Russia, Georgia, Armenia, Iran and Turkey.

The country also gets a natural boundary in the form of the Caspian Sea that has given Azerbaijan a coastline of approximately 800kms while the Greater Caucasus mountain range straddles this land on another side.

Historical and archaeological evidence suggests the region has been inhabited since the Stone Age and is witness to the rise and fall of several empires whilst bearing testimony to the bustle of the ‘Silk Road’.

Showcasing a blend of Eastern Europe and Western Asia, Azerbaijan has its own share of gory. Wikipedia states: “The Azerbaijan Democratic Republic proclaimed its independence in 1918 and became the first democratic state in the Muslim-oriented world. The country was incorporated into the Soviet Union in 1920 as the Azerbaijan Soviet Socialist Republic. The modern Republic of Azerbaijan proclaimed its independence on 30 August 1991, prior to the official dissolution of the USSR in December 1991.”

To be honest, the thought of travelling to Azerbaijan would not have popped into my head if not for my elder sister Raka, who came up with the plan of visiting one of her best friends. This one is an Azeri national and lives in Baku. So when Didi asked whether I want to tag along… well… you know what the answer was!

During our weeklong stay, we lived with Didi’s friend’s elder sister who has her home in Baku, the largest and capital city of Azerbaijan.

Baku is a potpourri, a visible proof of the different influences that have left a mark on Azerbaijan. The blend of Turkish and Arabic, the influence of European designs and the Russian past are evident in the buildings that stand tall over the roads of Baku. Thriving due to the oil industry off the Caspian Sea, Baku balances the old and the new.

There is a lot more to Azerbaijan than just the capital city, but one cannot afford to miss exploring the lanes of Baku. Consider a trip to Baku as the beginners’ lesson in the history of Azerbaijan and a glimpse of what awaits the travelling soul.

If you have just one day on hand to spend in Baku, then you must spend time in the Old City. Protected by a boundary wall, the most ancient part of Baku includes the Palace of the Shirvanshahs and the Maiden Tower, both of which have been listed by UNESCO as World Heritage Sites. In fact, if memory serves right, all of the Old City is marked as a World Heritage Site. Well, how’s that for credits!

Stepping inside the Old City gates through the double doors takes you back into ancient days. Rubbing shoulders with structures that could date back to as early as the 7th Century – historians differ on the dates (as always!) – are buildings that were built in the 19th and 20th Centuries. Local residents said in the 1800s, as the walled city started getting crowded, the city started seeing the setup of new neighbourhoods on the outer boundaries. This led to the division of the city into the Inner City and the Outer City. Over a period of time, several old buildings were demolished but in most cases, the local authorities managed to renovate and rebuild.

Must do in Baku Old City

Soak in the different architectural designs…

…as you walk along the cobblestone streets. Little alleys tucked under massive trees, winding by lanes giving a glimpse of houses along the path, souvenir shops and carpets all around, a stroll through the Old City is a walk through wonderland. Grab an ice-cream to snack on as you pop in and out of these stores to examine the wares.

…a breathtaking, neck-breaking building that has bagged the tag of being a World Heritage Site. The history of the tower, unfortunately, is a bit murky. There are several tales related to the Baku Maiden Tower that dates back to around 7th/8th Century BC or the 12th Century. One such tale is about the fair maiden who would stand atop the tower, awaiting her lover who would journey into the sea on his ship. For reasons best known to storytellers, the lover vanished without a trace leaving the maiden heartbroken. The lovelorn girl is said to have jumped off the tower to her death. A second legend mentions a fiery-haired girl who came as a blessing to vanquish the enemy that had trapped the citizens of Baku inside the fortress. It is said that she who had been sent by the Ahura Mazda defeated the enemy single-handed. Historians have also suggested that the term ‘maiden’ was bestowed upon the tower as it has reportedly never been desecrated by enemies.

It should be noted that after an earthquake in 2000 that caused damage to several historic structures, the Maiden Tower was restored and renovated under a Conservation Master Plan. Grab a ticket from the counter opposite the entrance to the tower and walk up the narrow steps to the top of the tower for a heart-stopping view of the Old City, the Boulevard and the Bay. Exhibits on each floor make the climb educational and interesting.

Explore the Palace of Shirvanshahs…

…which is quite simply put, a celebration of a state with a history of over a thousand years. The Shirvanshah, as per our guide, was a dynasty that set the foundation for modern-day Azerbaijan with this unique masterpiece, an example of ‘medieval architecture’. The palace complex is collectively made of several structures that have played different roles and were built over a period of time. The prominent among these are

If you are a history buff like Didi and me, then I insist you shell out some extra mannats (local currency) for a guide. We were lucky to find an English speaking guide who kept us engrossed with her knowledge and willingness to answer our queries. And mind you, we sisters can come up with a lot of questions!

Building of the main complex started in the 15th Century and was added to over the years. After the downfall of the dynasty, however, the palace fell into disrepair. Further damage occurred when the Soviet troops took over parts of the palace and used them to store their weaponry. The compound fell into disrepair until renovation and restoration work was taken up in the late 1900s.

As per our guide, the most important part of the compound was the Tomb of Seyid Yahya Bakuvi – historians believe that the first Shah chose to have the palace constructed around this place of worship as the Sufi saint continues to have the power to fulfil your wishes. Wishes aside, you can head below ground level to see the tomb that is covered with intricate designs.

My favourite part of the entire complex was the Bath House or Hamam that was discovered during excavations in 1939. As per the guide, it was a group of construction workers that stumbled upon these buildings which had been buried under the sands of time – literally – and was found when they were digging what was once a park to construct a new building. With much of the original structure still intact, you can see the drainage system that had been set up by the architects and the manner in which different bathrooms had been built.

Pop in for chai and jam…

... at the Multani Caravanserai (since the 14th Century) or the Bukhara Caravanserai (established in the 15th Century). Azeri tea is an integral part of their culture that you must experience. If you are the kind who loves museums, then you absolutely must check out the Museum of Miniature Books. A one of its kind museum, this room exhibits books from the private collections of prominent Azeri nationals.

The tales of my travel to Azerbaijan will continue in the coming days. Here’s hoping they inspire you enough to book those air tickets soon! Don’t forget to follow me on Instagram, Facebook, Pinterest.

Athens, Where History Lies Under the Sun #2