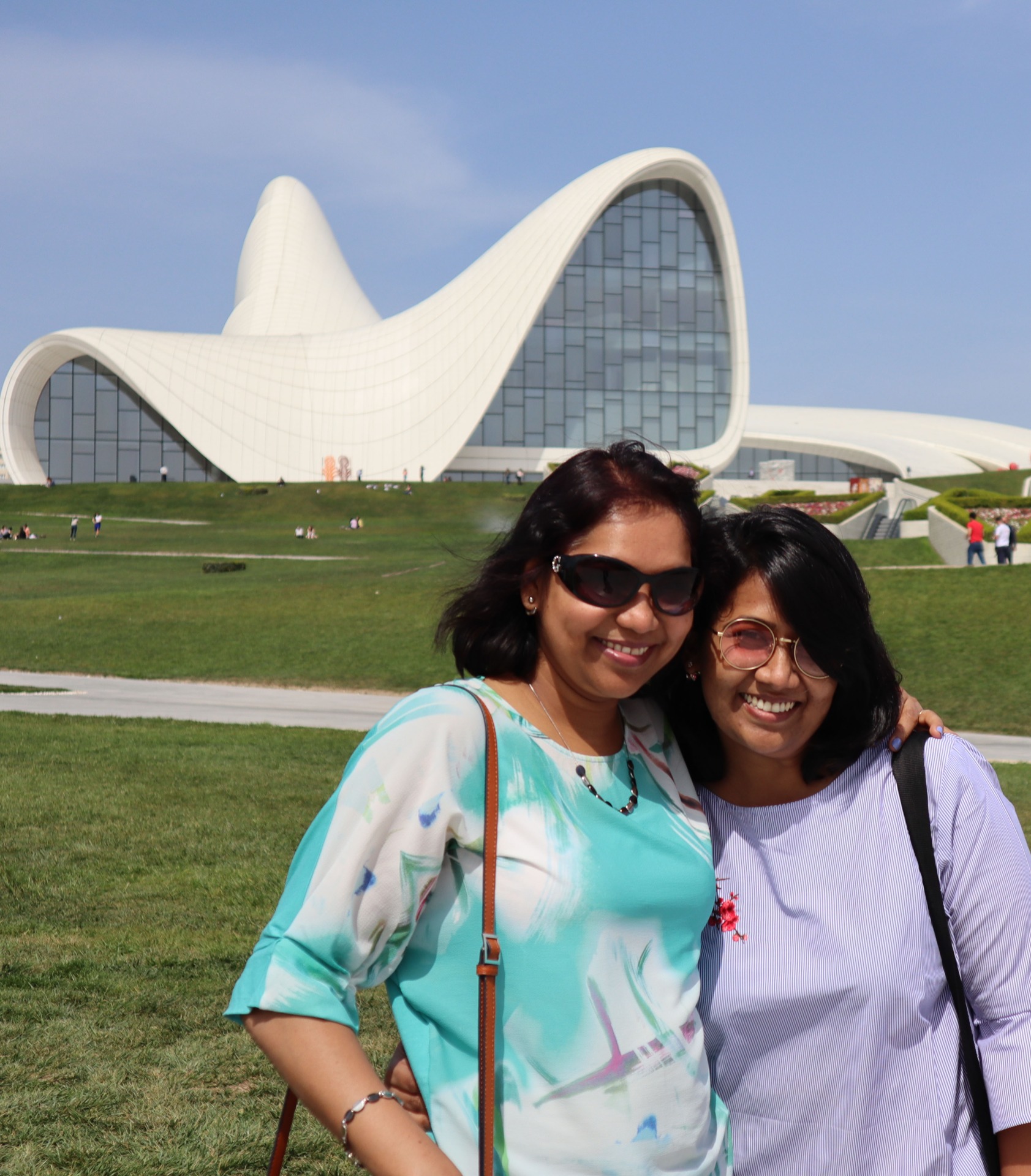 Baku, a potpourri of influences #Chapter 2

Holy smokes! A year ago at this time, I was walking through the lanes of Athens, debating over souvlaki and gyros while ticking places off my ‘must visit’ list. With my favourite travel partners – the elder sister and brother-in-law – I was busy getting a Greek suntan.

Fast forward to the summer of 2018 and I am sharing tales from my trip to the lesser-known but utterly beautiful Azerbaijan.

In the week gone by, I’ve used up (hopefully!) some of your precious time to sing praises about Azerbaijan – I’ve waxed eloquent about the marvels of the Old City in Baku (read Baku, a potpourri of influences #Chapter I) and been a tad bit emotional about the tea culture and lush desserts that the cuisine has to offer (more on Chai, halva & Azeri hospitality). As always, there is more.

If I were to speak in travel language and break down your stay in Azerbaijan by days, I would recommend 10-15 days. Of these, Baku deserves not less than three days. How else will you soak in the cultural and historical vibe of the city?

Somewhere in one of the earlier posts, I mentioned that Baku is a potpourri, a visible proof of different influences that have left a mark on Azerbaijan. With an urban landscape that looks like the love offspring of Europe and a Middle Eastern country (no offense meant!), the capital city of Baku is a surprising mix of the modern and historical.

So, after you’ve dedicated a day to the Old City – unless you are on mission fast track and just glance at things rather than delve deeper – keep aside two days for Baku. Why two days? I’ll tell you…

There is a significance to the name and design of the most prominent building in Baku’s skyline, the Flame Towers. The trio of skyscrapers that has apartments, a hotel and office space has been made to resemble the city’s official symbol, a flame. The flame, in turn, is a testimony to the country’s past when people worshipped fire. A bit of internet search will reveal that the construction of Flame Towers was completed in 2012; it was designed by the US-based firm HOK; it cost an approximate US$350 million to build, from start to finish.

Built on a hill near the Caspian Sea, the Flame Towers seem to rise out of the sea of buildings as you get closer to the heart of Baku. While the blue-glass buildings glitter and sparkle under the sunlight during the day, by night the LED screens that cover the surface come alive during a continuous light show with images interchanging between roaring flames, old historical structures, football, and the national flag.

The best way to enjoy a view of the city’s skyline along with the Flame Towers is to drive up to the hill near the TV tower – once during the day and again at night.

I am still unsure what I liked more here – the fluid lines of this architectural wonder or those huge colourful snail installations that dot the surrounding gardens! Designed by Iraqi-British architect Zaha Hadid, this centre is a hub of activities – it provides space for exhibitions, hosts international programmes and music shows in the auditorium and even has a museum.

The design of the building bagged the architect, and the building,  prominence in the international circuit and a couple of awards too. I’ve been told that the interiors of this centre are as mind-boggling as the outside but I wouldn’t know. I was busy chilling in the gardens, lounging on recycled garden furniture whilst munching on roasted chestnuts.

Psst… there are several buildings that carry the name of Azerbaijan’s first President. Don’t confuse this centre with those other buildings.

The beautiful and never-ending Boulevard in Baku is a looooooooooooooong walkway along the shore of the Caspian Sea and is dotted with cafes, bars, restaurants, an upcoming shopping mall, parks, etc. and is usually packed with walkers, skaters, cyclists or strollers throughout the day.

Walk down the pedestrian promenade for a startling view of the glittering waters of the massive lake – you can even spot the oil rigs at a distance, ogle at private yachts and speedboats anchored off the boulevard. The boulevard carries a 100-year-old history. Established to connect the oilfields in a particular municipality to the main city, since 1900 the boulevard has developed with inputs from different architects, the efforts of several public authority figures and support from Baku residents. Some of the more prominent buildings along the boulevard are the International Muğam Centre, the Baku Business Centre, the Park Bulvar Mall, the Crystal Hall and the London Eye inspired Baku Eye Ferris wheel.

The elder sister, me and our host revisited our childhood at the Boulevard and it all began when I insisted on indulging my sweet tooth with some cotton candy. A pink cloud in hand, we spotted a toy train that operates between two points. Off we went, chugging in the train and giggling away to glory towards a ride through mini Venice. As the name suggests, it is a replica of Venice, complete with canals and boat rides.

Listed among ‘must visit’ places in Baku, the Şahidlər Xiyabani also known as the Martyrs’ Lane is a beautiful but somber reminder of Azerbaijan’s gory history. A cemetery and a memorial, it is dedicated to the martyrs of a crackdown in Baku on January 19-20, 1990 and also those who lost their lives in the Nagorno-Karabakh War. While the latter was an ethnic and territorial conflict, the former is a dark chapter in the events that transpired during the dissolution of the Soviet Union.

The most poignant visuals at this picturesque cemetery built atop a hill are the row of tombs along the lane that leads to the Eternal Flame memorial complex. Each tomb has a headstone with a photograph of the deceased. The most touching of these is the tombs of a couple — Fariza and Ilham Allahverdiyev.  While Ilham was shot dead by the Soviet troops, a heartbroken Fariza committed suicide.

Walk up the lane to the memorial complex, pay your respects and then walk down to the adjacent garden and restaurant where you can settle on the benches to watch the sun go down on Baku.

For religious or non-religious purposes, do squeeze in visits to the famed Mir Movsum Aga Mosque and Bibi-Heybat Mosque in Baku. Both wonderful specimens of architecture, they are considered to be among the holiest places in Baku. Folklore says Mir Movsum Aga was a physically challenged man with supernatural powers and much revered by the people of Baku. The Bibi-Heybat Mosque, meanwhile, is a recreation of a mosque by the same name that had been built in the 13th century by the ruling Shirvanshah before it was destroyed in 1936.

It is not unheard of for people to visit either mosque with prayers of fulfillment on their lips; once the wishes are fulfilled, the devotees distribute candles and candies to fellow devotees vesting the mosque.

As no travel is complete without a visit to at least one visit – or more in some cases – here is a quick list of museums in Baku that are worth a dekko. We visited only one of them since the others were closed for renovation and restoration in preparation for the tourist season in the months of June-July. So in no particular order…

Hey again! Got some time on hand? If you are enjoying these posts about Azerbaijan, then the posts about my summer trip to Athens would be right up your alley. Athens, where history lies under the sun #1 / #2 / #3
Meeting the Oracle at Delphi | Eating done the Greek way
‘Dip’ it Greek style: Skordalia & Tzatziki | Greek-style kebabs, the Chicken Souvlaki

15 of the best virtual tours #Part2