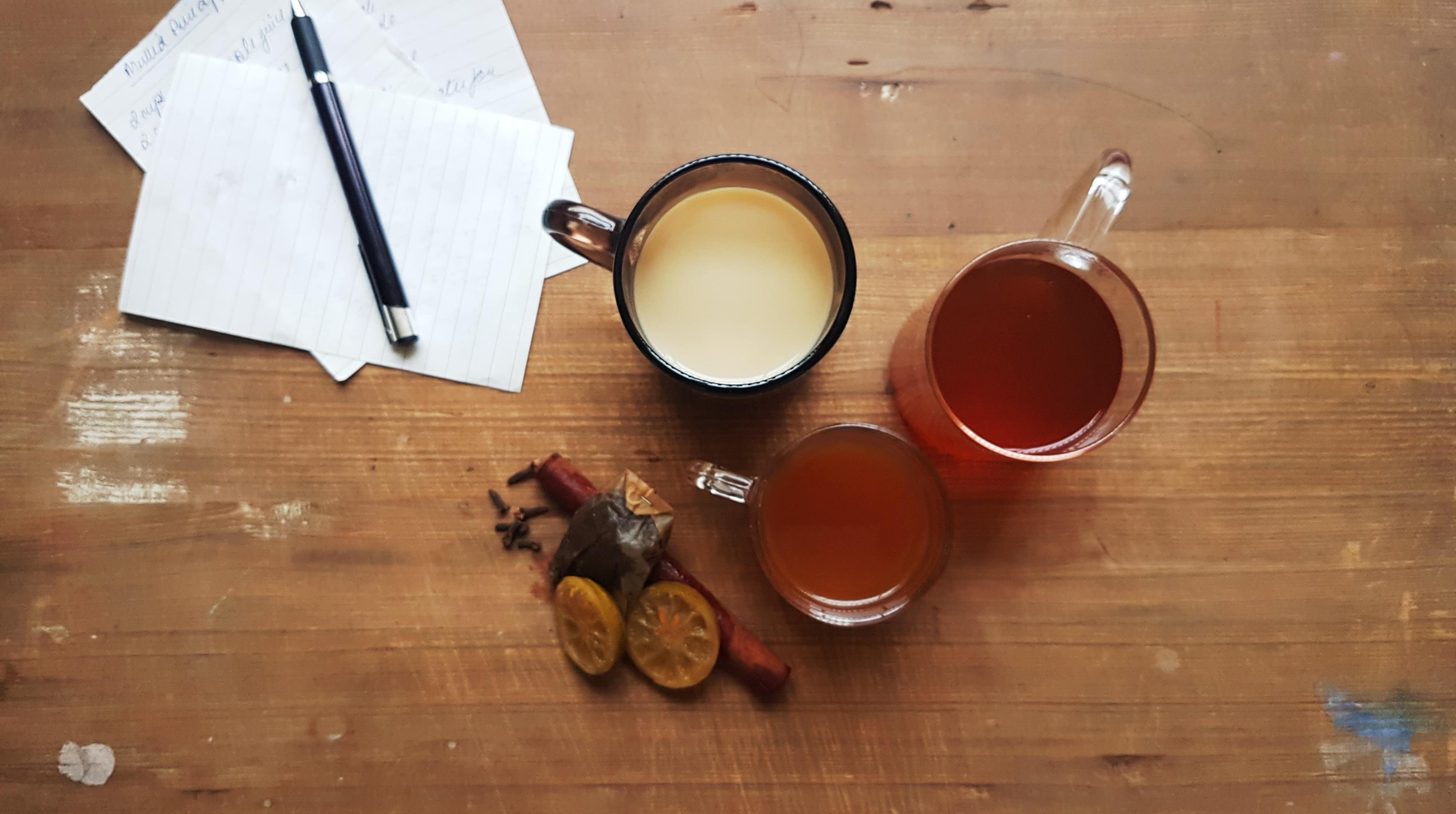 If I ever have to choose between tea and coffee, the latter will always be my soul choice. My knowledge of all things tea ends at the Indian kadak chai* and an occasional green tea mostly consumed when I am desperately trying to fight what I call the ‘fat deposit battle’.

But recently, I have discovered that tea soothes that occasional need for something hot to lift your soul. Especially at the onset of winter when evenings are just the right kind of cool and not cold.

These sentences were taking a languid stroll through my mind on a Monday evening while I was on a cleaning spree. Books from needlework classes and dance notes were being dug out of the depths of a cupboard when I laid hands on a mangled plastic folder crammed with clippings. These bits and pieces of paper were recipes that I had collected over the years – cuttings from magazines or newspapers. Treasure chest alert!

Among these were some clippings of tea recipes – coincidence is a reality I guess – and it seemed a good idea to try these recipes on that November evening. And avoid cleanup duty too.

So here are the recipes for Marmalade Tea, Pineapple Chai, and Spiced Green Tea, sources unknown and the good-bad-ugly of that 1 hour in the kitchen as I brewed them.

I love marmalade, especially orange marmalade on/with almost everything… in my cakes, on the bread, with the paratha** or on a cracker. The sweetness of the jam with the hint of bitter from the fruit’s skin is among the little delights of life. And you get to drink that!

This was definitely the best of teas I have ever tasted. It will warm the corners of your heart. The perfect pick-me-up drink as you take a mid-morning break from work and a refreshing accompaniment as you snuggle with the current read over the weekend.

I suggest making it in a glass container so that you can see the tea steep and the marmalade gradually melt into the water, the brewed tea taking a golden hue. Here’s how you make it

Method:
Bring water to a boil and drop in the tea bags. Reduce the flame and allow the tea to steep for 5 minutes. Add the marmalade, sugar, and stir till both have melted. Add the lemon juice and mix well. Strain (if you wish to) and serve.
Note: I added an extra ½ tablespoon lemon juice to increase the tanginess. Adjust the sugar level as per your taste – the final product was to my taste but Maa found it way too sweet. Scoop out the marmalade bitters to nibble on or dry them for use in homemade candles.

Cloves, cinnamon, lemon – how can you go wrong with this combination. I adore the strong aftertaste of the spices in this tea; it gives you a kick #kidyounot. The kitchen smelled Christmassy when this tea was being made and I feel it can top the list for an after-dinner drink during your December parties, especially if your guests are too full for dessert. Brew, strain, heat, serve. I wouldn’t mind this tea during one of my movie/sitcom marathon nights.

Warning: This beverage might not be everyone’s cup of tea so I suggest making half the amount. Taste it and if you like it, then go all the way!

Method:
Combine the water and juice in a pan and bring to boil. Add the tea bags, cloves, cinnamon and lemon, and simmer for 10 minutes. Strain and serve with a cinnamon stick popped into the mug for added flavour.

To be fair to this decoction, the only reason I gave it a shot was because green tea+milk sounds strange. And I am not a fan of this tea for sure. Don’t know where I went wrong – perhaps I should not have boiled the tea leaves, or they should have been added at the absolute end, or the tea should have been of the milder variety and if not then I could have used fewer leaves.

This recipe called for milk. I made one with milk and repeated the process a day later without milk. The experiment on day 2 was so much more palatable. So I decided to post the original recipe for the adventurous ones. Those looking for a spicy green tea can just skip the milk.

Again, try half the amount. If you like, then go full throttle.

Method:
#Bring water to boil, add the cinnamon, ginger, cloves and simmer for 10 minutes. Add the tea leaves and steep for 5 minutes. Pour in milk and heat until near-boiling. Strain and serve with a dash of honey.

Note: Don’t throw the spices and the tea bags used for these drinks. I used the spices – cinnamon/clove/ginger/lemon slices – to make infused water the next morning. Add one or two of the used tea bags, a sprig of mint leaves for a refreshing taste.