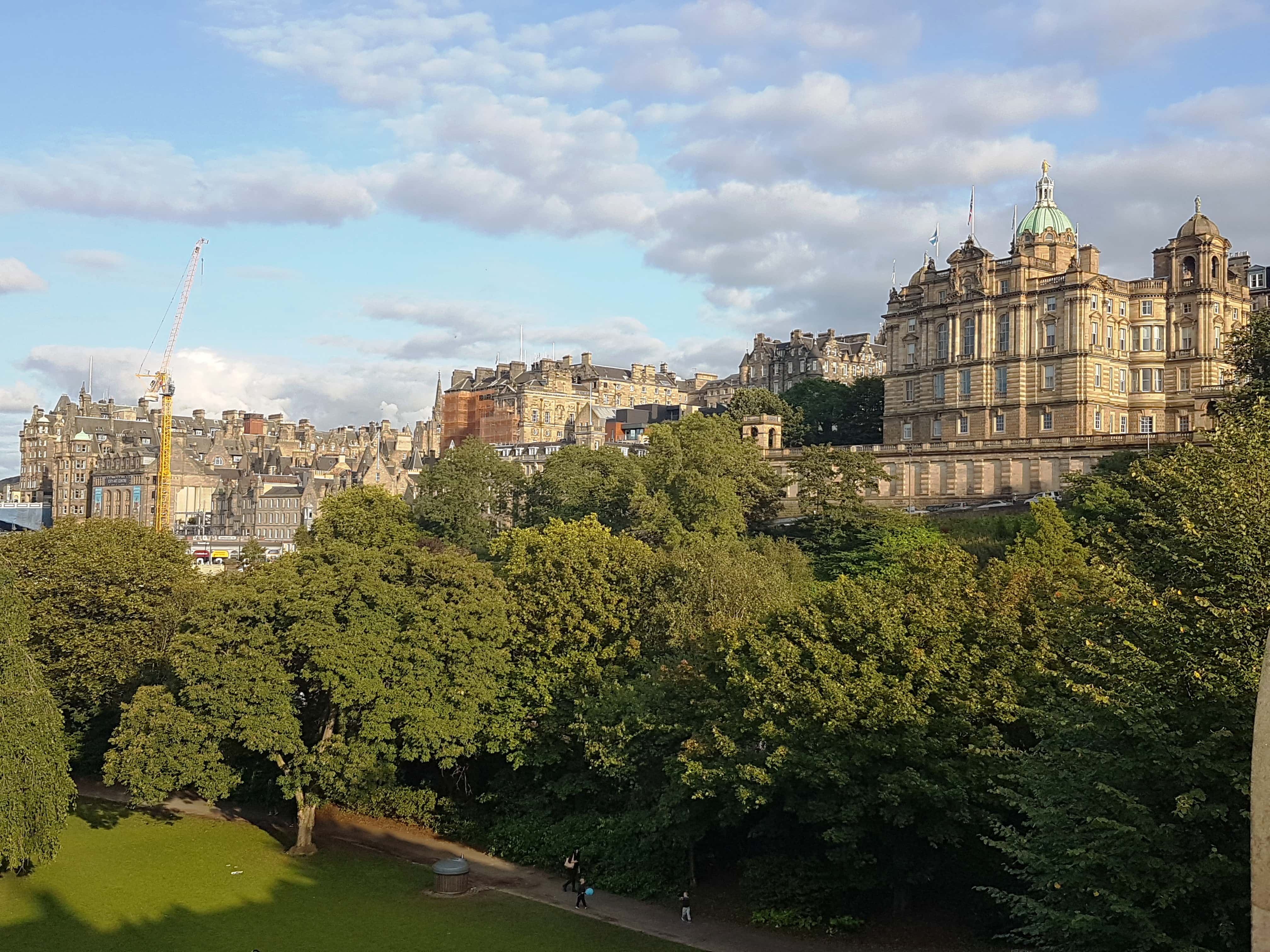 I confess. I have a crush on Edinburgh. I have been in love with Amsterdam from when I first set foot on that gorgeous slice of heaven on earth. But now Edinburgh, with its cobbled streets, mix of old-new structures and a skyline that gives off a broody Gothic vibe on a cloudy day, has found its way into my heart.

Having experienced the colourful energy that takes over the city towards the end of the Edinburgh Festival, I want to return to Scotland’s capital – once to devote time (and money!) to the cluster of festivals that light up the ‘Festival City’ and again to walk through the city when it is not overflowing with tourists. As the owner of a coffee shop said while handing over my cuppa, “There are two Edinburgh. One is the crowded city during the festival and the other is the one that belongs to the locals. If you truly want to experience the land of the poets, then you must return once the fest is over,” pointing to a sign that displayed Scottish author Ian Rankin’s rather apt statement:

“Edinburgh isn’t so much a city, more a way of life… I doubt I’ll ever tire of exploring Edinburgh, on foot or in print.”

A quick fact: Edinburgh is divided into two areas – the Old Town and the New Town, both of which are Unesco World Heritage Sites. For more details, I suggest heading to the official website of the Unesco and locate ‘The List’.

This post was first published on From The Corner Table on 18 December, 2017.

Writing about the time I spent in Edinburgh, I find, has been a job easier said than done. How does one put into words every second of a unique experience? Do I write about the awe I felt when I first saw the majestic Edinburgh Castle atop the Castle Hill or my reluctance to visit the Scott Monument? And then when I walked through a crowd of people only to step into the midst of a performance by a fire eater; so much done, it could be a never-ending story.

The best part about Edinburgh is that you can comfortably walk to anywhere and encounter buildings and alleys with unique characteristics. And in lieu of the jumbled lanes and gothic structures of the Old Town in contrast to the posh buildings and well-maintained gardens of the New Town, Edinburgh is best explored on foot.

My favourite part was the Royal Mile – the heart of the city. With the Edinburgh Castle at one end and the Palace of Holyroodhouse at the other, the stretch of streets has some of the most striking buildings. From some of the oldest pubs to new ones, stores selling handmade jewellery to tartans, whiskey tasting places, and sweet stores, the Royal Mile is the one-street answer for the eat-drink-shop part of your trip. Don’t miss out on St Giles Cathedral in the middle of the Royal Mile. Easily one of the most beautiful structures I crossed several times in two days but missed entering, probably because I was too distracted by the crowd and the street performers. Since the Royal Mile is a set of streets what you will be doing is street hopping. A lot of fun when the connecting streets are named Castlehill, Lawnmarket, High Street, Canongate and Abbey Strand. #quaintnames #edinburghstreets

Off Royal Mile, walk uphill on Victoria Street which will probably remind you of Diagon Alley from Harry Potter. And yes, there will be several references to the books and movies because hello! For those who came in late or too early, J K Rowling moved to Edinburgh and it is here that she started writing the famous series. If you are a fan you will love to pop into one of the several stores selling official Potter merchandise and perhaps join The Potter Trail.

Royalty and a touch of ‘time’ frenzy

Tourists and locals alike insist that a trip to this city is incomplete sans the mandatory visit to Edinburgh Castle. Easily one of the most recognisable monuments in the world, it was a place my father insisted I visit. After all, a place that as per researchers is among one of the most attacked forts in the world would be worth a visit, right? I guess that was exactly what half the world’s population was thinking when they stepped into the castle grounds. It definitely felt like half the world considering the massive crowd!

Cribbing apart, you just cannot miss out on the impressive structure that continues to stand over the city like a seasoned guard. Tune out the crowd and you can actually feel the rocks throb with the history that it has witnessed and continues to witness. The birthplace of monarchy and overseer of the city that has burgeoned from the wilderness into the landscape that it is today, the Edinburgh Castle is akin to a live persona.

Personal experience insists that I urge you to book tickets online to avoid the long queue at the ticket windows. Do reach early morning. I sincerely hope that is the time of the day when the place is not teeming with people. You might want to try one of the free guided tours for information and perspective. And if shiny rocks are your thing, do see the Scottish Crown Jewels which date back to around 1540 and are likely the oldest set of crown jewels in Great Britain. The castle tour could easily use up 3-4 hours so do plan the day accordingly.

It was only when I walked out of the castle that I realised the amount of time it had taken up. With my evening booked for a food tour, I had only one more day left to see the rest of the city. The thought of being unable to cover more of the city in just one more day, after investing so much time and money in the trip, pushed me into panic mode. Battling the wave of anxiety, I came to a standstill in the corner of the gift shop, unsure of my next move.

Baku, a potpourri of influences #Chapter 2